The move has not gone down well with members of the Penang Pakatan Harapan-led government, with Penang PKR Youth urging Chief Minister Chow Kon Yeow to take stern action against the duo for supporting the “traitors”.

Its chief Fahmi Zainol said their acceptance of federal posts was proof of their support for Perikatan Nasional instead of Pakatan Harapan.

“Those who went against the people’s mandate in the 14th General Election must vacate their seats and pave the way for by-elections.

“If the Chief Minister takes this lightly, we will suffer from the ‘cartel virus’ which is being promoted by the opportunists, ” said Fahmi in reference to former PKR deputy president Datuk Seri Azmin Ali’s supporters, who have been labelled “the cartel” by his detractors.

Bersatu, which is now part of the Perikatan Nasional government at the federal level, was blamed for the collapse of the Pakatan government in February.

The party is split between former prime minister Tun Dr Mahathir Mohamad and Prime Minister Tan Sri Muhyiddin Yassin, with Dr Mahathir wanting Bersatu to return to Pakatan but Muhyiddin wanting it to remain with Perikatan.

On Feb 27, Zolkifly and Khaliq Mehtab had pledged their commitment to the state Pakatan government, which is now an opposition state.

Chow had then said the state would not take action with regard to the position of the duo, who had been left in the lurch following their party’s move to quit Pakatan.

Article 14(A)(1) of the Constitution of the State of Penang (Amendment) Enactment 2012 states that a member of the assembly shall vacate his seat if: (a) Having been elected as a candidate of a political party, he resigns or is expelled from or ceases for any reasons whatsoever to be a member of that party; or (b) Having been elected as an independent but later joins a political party.

As such, under the state’s anti-hopping law, both the representatives would have to give up their seats.

Meanwhile, Zolkifly said he would meet Chow after Hari Raya to discuss his position in the state.

“I do not regard myself as siding with any camp as there is only one party, Bersatu.

“I’ll issue a statement after meeting with the Chief Minister, ” he said.

Both Chow and Khaliq Mehtab could not be reached for comment. 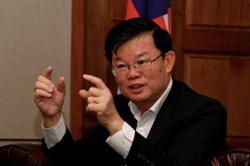