Melaka hotels up for sale, prices start from RM2.9mil to RM200mil

MELAKA: Ten Melaka hotels are up for sale, according to a message sent by property brokers to local prospects.

The message is being circulated among locals with the lowest selling price at RM2.9mil and the highest at RM200mil.

Melaka Tourism Business Club (MTBC) made checks with the hotels and other resources on the validity of the message before discovering it to be genuine.

MTBC vice-chairman Dennis Samford said one hotel was actually sold recently while the others are still looking for buyers.

"The hotels that were put up for sale include boutique and budget ones," he said on Saturday (May 23).

Samford said the Covid-19 pandemic had caused the tourism-dependent Melaka to lose over 1,000 rooms.

"The state may not be able to cope with the need of local tourists once the situation improves.

"At this point, the state government needs to help the hoteliers to maintain their operations by doing away with taxes and imposing moratorium on electricity and water bills," he said.

Samford said based on a survey conducted by MTBC, 60% of the hotels are unable to sustain their operations due to high utility bills apart from paying staff salary.

He said many hotels are in dire financial straits because of fewer guests during the movement control order (MCO) period.

Samford said domestic tourists are expected to return to Melaka after the MCO as it would take sometime before locals could travel abroad.

"There should be a mechanism to prevent these hotels from being shut down," he added. 'Golden' weekend for hoteliers as tourists return to Melaka 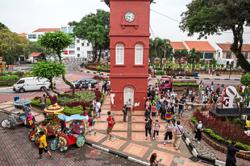 Tourism buzz finally being felt again all over the country