Volunteers look for survivors of a plane that crashed in a residential area of Karachi, Pakistan, May 22,2020. An aviation official says a passenger plane belonging to state-run Pakistan International Airlines carrying more than 100 passengers and crew has crashed near the southern port city of Karachi. (AP Photo/Fareed Khan)

PETALING JAYA: Transport Minister Datuk Seri Dr Wee Ka Siong has expressed its condolences to the families of passengers aboard a Pakistan International Airlines jet that crashed in Karachi on Friday (May 22) afternoon.

Dr Wee said he received with a very heavy heart the news of the crash, where dozens had perished.

“Our prayers and thoughts are with the families of the passengers, crew and everyone affected on the ground during this very difficult time, ” he said on his Facebook on Saturday (May 23).

On Friday (May 22), it was reported that an Airbus jet carrying 99 passengers crashed into a crowded residential district of Karachi city in the afternoon after two landing attempts at the airport.

At least 80 people were confirmed to have died, provincial health authorities said, but it was not immediately clear whether they included casualties on the ground. 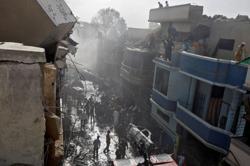 Cabbies told to renew driver’s card to get aid