There are 22 Bersatu divisions in Selangor.

“When Tun submitted his resignation as party chairman on Feb 24, it was unanimously rejected by the Bersatu supreme council.

“A day after that, Muhyiddin and several top leaders went and met Tun at his house and told him that his resignation was rejected. He was requested to remain as chairman,’’ said Mohd Shaid.

He said Dr Mahathir agreed to remain as chairman two days after the visit.

According to Mohd Shaid, when the party leadership wanted to replace then party secretary-general Datuk Marzuki Yahya with Datuk Seri Hamzah Zainuddin in March, they had written to Dr Mahathir to inform him about it.

“If Tun was no longer the chairman, why did the party leadership have to write to him about the replacement of the secretary-general?’’ asked Mohd Shaid.

He said in the event Dr Mahathir, deputy party president Datuk Seri Mukhriz Mahathir or any dissenting party member was removed from Bersatu, there would be lawsuits.

He pointed out that it was announced in April that Dr Mahathir had won the post of chairman uncontested in the upcoming party elections.

Harumaini said Abdul Rashid had issued the statement to support Muhyiddin as acting chairman on his own and not collectively with other party leaders.

When contacted, Abdul Rashid, who is also party vice-president, said Selangor Bersatu was firm on its stand regarding the matter.

“We are wholly behind Tan Sri Muhyiddin and there is no doubt about it.

“All state Bersatu leaders had agreed to throw their support behind Muhyiddin during a meeting on Feb 18.

“Mukhriz came visiting a day later and some of them changed their minds and retracted their support,’’ he said.

Apart from a select few, Abdul Rashid said the rest of Selangor Bersatu members were supportive of Muhyiddin being the acting chairman. 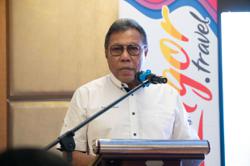