China’s Ambassador to Malaysia Bai Tian said many people were facing difficulties during this time.

He said as such, the embassy decided to donate the food packs containing cooking oil, rice, milk and other necessities worth a total of RM200,000.

“I hope our humble contribution can help make a small difference for a peaceful and joyful Hari Raya,” he said in his speech at the handover ceremony to Jawi yesterday.

Zulkifli said the distribution to the poor would be handled by Ikram and Mohd Chan Welfare Organisation.

“This collaboration is good as it will allow the contribution to reach the targeted people fast,” he said.

According to Dr Zulkifli, another matter being discussed was the distribution of food aid to non-Muslims, adding that Jawi would make donations available to any community in need. 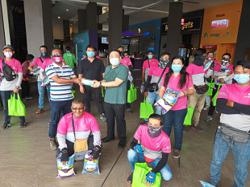