PETALING JAYA: The frontliners battling the Covid-19 pandemic outbreak were given a round of applause by lawmakers in the Dewan Rakyat as an appreciation of their effort.

Yang di-Pertuan Agong Al-Sultan Abdullah Ri'ayatuddin Al-Mustafa Billah Shah Almarhum Sultan Ahmad Shah Al-Musta'in Billah had asked all lawmakers to give a standing round of applause to the frontliners who have sacrificed for the nation.

The King said the country has been facing the Covid-19 outbreak since February, however, he said that all Malaysians have to come together in facing the challenges.

"The frontliners, especially those in health, armed forces, police, Fire and Rescue Department, Immigration, the National Disaster Management Agency and others involved have come forward with full and highest dedication to handle the outbreak.

"They are making sacrifices without knowing tiredness or fear of putting their own lives on the line to look after the safety and interest of the public.

"So, to show our appreciation, let us please stand up and give a round of applause to our frontline heroes and heroines," said the Yang di-Pertuan Agong in his Royal address on Monday (May 18).

The King said the government has provided safety and security to the rakyat through various measures, such as implementing the movement control order (MCO), bringing back stranded Malaysians overseas, among others.

However, he also said there are many businesses and industries affected by the outbreak.

"I would like to urge employers not to retrench their workers easily. All parties must do their part and sacrifice to save the nation's economy.

"The government should look for approaches to help companies and businesses that are badly affected by the outbreak," he said.

The King also hoped that the impact of the RM260bil stimulus package announced by the government would be felt immediately. 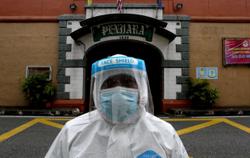 Prison personnel: Are we not frontliners too?