A journey that shaped lives 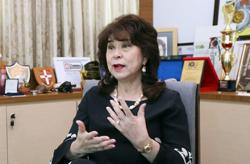 THE world of journalism is defined by tight deadlines, where stories need to be written, edited and pages laid out within a certain time frame.

Despite that, Karen Chapman still managed to touch the hearts of many along her journey – colleagues, past and present – as well as friends going as far back as 25 years.

Goh said that Chapman was very well informed about education issues, and the "go-to person" if anyone had a query.

"If any of her colleagues needed help or a contact number, she was quick and generous with help. As a person, she was warm, kind, humble, soft spoken and hardworking.

"She was thoughtful and would do little things to let that person know she cared. She left us too soon but she will stay in our hearts and memories forever," said Goh.

"She was serious, responsible, reliable and knew her stuff. Indeed, she earned her stripes as education editor with her years of experience and knowledge in the field.

"I will also remember her as a shy and gentle soul who gave her best in all she did. Rest in peace, Karen," said Wong.

Sunway Education Group chief executive officer Elizabeth Lee not only worked with Chapman on a professional level, she also bonded with her on a personal level.

"On Teachers Day I wish to pay tribute to a true educationist who had a deep appreciation of the state and play of education in Malaysia.

"I knew her first as the ever diligent journalist, who never cared for the time nor day nor public holiday to follow up on news about education. She featured stories with a heart because that's just her, all heart," said Lee.

Jeyamalar Kandiah worked as a sub-editor with Chapman for a decade before her recent retirement.

"We used to joke that Karen was married to her job – and indeed she was as it took priority over everything else for her.

"She was 'spot on' when it came to names, titles and designations of education officials, whether in the public or private sectors. She had a generous and caring side, often bringing snacks and goodies for those at the desk," said Jeyamalar.

Linda Archibald, a friend and contemporary who journeyed alongside Chapman for more than 25 years, said: "We've weathered some storms of life together – she, Shamala (Gopalan) and me.

"Little did we know when we first got to know each other back in that newsroom at The Sun in 1994, God would bless us with friendship.

"Though a quiet and gentle soul, she worked very hard – tireless and unwavering throughout her career. She was never one to shrug off responsibility. She remained humble and continued to have great integrity.

"Her Catholic faith and her close-knit family have always been the anchor and cornerstone that kept her so rooted, even as she moved up the ranks from being a journalist to an editor," said Archibald.

"I lost a wonderful friend today but I will forever be blessed by the beautiful memories of our friendship," she said.

Having worked with Chapman closely over the past 14 years as the Newspaper-in-Education editor, Sharon Ovinis saw a side to Chapman that was almost always private – one that placed the importance of family values above all else.

"Karen was close to her family and had a soft spot for her friends' and colleagues' children. Her interest was always genuine. She had the uncanny ability to remember the minute details that most people don't retain. And it made one feel special. Farewell my friend," she said.