IPOH: Friday and Sunat Aidil Fitri prayers will be allowed to be held, subject to conditions, in mosques and suraus throughout Perak.

Shahrul said all mosque and surau committees must, however, adhere to a set of conditions, which included limiting the number of people allowed to congregate and following the standard operating procedures as set by the Health Ministry.

"There must not be more than 12 people, including the imam and khatib.

"The mosque and surau committee will also need to identify and approve the number of people based on the number of its committee members and officials," he said, adding that mosques and suraus will remain closed to the public.

"Those attending the prayers must also have their temperature checked, sanitise their hands and write down their details in a log book.

"They also need to perform the wuduk to cleanse themselves beforehand and bring their own prayer mat," he added.

Shahrul said those with symptoms like fever, difficulty breathing, sore throat and cold would not be allowed to go into the mosques and suraus.

"We also don't encourage people aged over 60 to go.

"Those with a history of diabetes, high blood pressure, asthma and cancer are also barred," he said.

Shahrul said mosques and suraus would be allowed to use their loudhailer when reading the khutbah or takbir.

"The azan should also not exceed 20 minutes while the khutbah texts, as prepared by the Perak Islamic Religious Department (JAIPk), need to be simple and concise and not more than 10 minutes.

"Attendees must leave after the prayers and they are not allowed to have meals at the mosque or surau," he said.

"The conditions must be met or they will not be allowed to hold the prayers.

He said a set of guidelines on conducting the Friday and Sunat Aidilfitri prayers would be issued to all the mosque and surau committees. Perak to allow mass prayers in mosques, surau from June 12 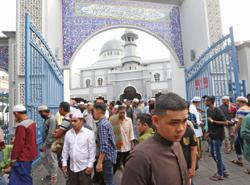 Women joining Aidiladha prayers in Perak mosques must be accompanied