The Home Minister said such cases touched on the sensitivities of society.

"Based on statistics, there is an increasing trend of seditious cases in 2018 and 2019 involving offences against various entities, including royalty, race, religion, sovereignty and special privilege.

"Such entities are protected by the Federal Constitution," he said in a statement Thursday (May 14).

"This shows a significant spike in cases over the past three years.

"As of May 11, a total of 262 IPs were opened by authorities in investigating the spread of fake and seditious news that caused public distress.

"We are taking the matter seriously as such cases can disrupt public order and security," Hamzah said.

The ministry will not hesitate to take action based on existing laws including the Penal Code, Communications and Multimedia Act 1998 and the Sedition Act 1948 to preserve peace and harmony, he added.

"We will not compromise against any party who deliberately tries to provoke or disrupt public order and safety.

"All parties are advised not to issue or spread fake information or seditious news to ensure the safety and security of society," Hamzah said. The Week That Was 20h ago 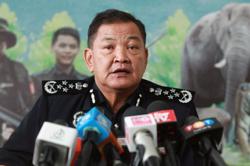