Addressing privacy concerns: Khairy (left) said the government is focusing on a campaign to persuade citizens to use the MyTrace app, which measures how long a user’s phone has been in proximity with other MyTrace users — Bernama

PETALING JAYA: The government does not want to force people to use the MyTrace app but rather hopes that the public will utilise it voluntarily, according to Khairy Jamaluddin.The Science, Technology and Innovation (Mosti) minister said if people were forced to use the application, they would have concerns over their privacy.

“If we force people to use the app, then concerns over the privacy will be exasperated – the government is forcing us to download the app, who knows what insidious plans they are having with this app.

“That’s the thinking behind forced adoption of technology and applications in your smartphones, ” he told BFM in an interview on Friday.

He said they were focusing on a campaign to persuade users that using the application could break the chain of Covid-19 infection.

MyTrace is a contact tracing app that uses Bluetooth technology to measure how long a user’s phone has been in proximity with other MyTrace users.

If a MyTrace user is diagnosed with Covid-19, this would allow the government to track and contact those who were with him and might have contracted the virus from him. The collected data stays on the phone for 21 days. The application only works if the user’s Bluetooth connection is turned on.Khairy also allayed privacy concerns of those reluctant to use the application, saying that data are stored only on the phone and not on any government server.

He said they would be publishing the source code for the application soon so that people could see for themselves how it worked.

“We should be publishing it soon so that at least those who are technically inclined can make sure the codes will confirm what I am saying, ” he said.

Khairy assured that Google and Apple were strict with the use of Bluetooth technology and those who used their application programming interface (API) had to make sure the data were not stored in any centralised government server.“It is decentralised on the user’s phone. Whoever you have been in close contact with, I can’t access that unless you give me permission at the point of you being tested, ” said Khairy, adding that this kind of application was used all over the world.

The application is currently available only on the Android platform but Khairy said it should be on the IOS play store soon. 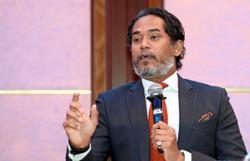