KEPALA BATAS: Police have arrested two people they believe responsible for a series of house break-ins and thefts here.

He said after an incident related to a car tyre theft and several break-ins at homestays in Taman Penaga went viral on social media, police conducted an investigation to identify those responsible.

"A police operation conducted by the Criminal Investigation Department (CID) D9 unit raided a house at Jalan Kota Aur which to the arrest of the two suspects," he told a press conference at North Seberang Prai police headquarters here Friday (May 1).

Also confiscated were a car, a car jack and tools for changing tyres.

ACP Noorzainy said the two also admitted that they committed the crime at Taman Penaga and had broken into two homestays.

"The total seizure is estimated to be worth about RM15,000 and the suspects will be remanded until May 4," he said.

The case is being investigated under Section 457 and 379 of the Penal code for burglary and theft.

Photos of a woman’s car missing all four tyres went viral on social media and prompted concern in the neighbourhood.

The woman subsequently made a police report on Tuesday (April 28) after she was told by her neighbour about her missing tyres.

Group of 20 fined shortly after midnight 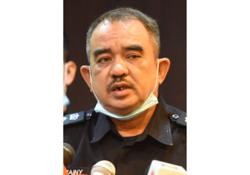