More closures: Ipoh’s Syeun Hotel is another establishment that will retrench staff due to the Covid-19 outbreak.

PETALING JAYA: Hilton Kuala Lumpur is offering staff members options for the employees retention programme and retrenchment as a measure to keep it afloat.

The hotel in a letter to its employees said a group of team members would be placed on the employee retention programme where it would provide financial aid of RM600 on a monthly basis for a period of one to six months.

“In the event of unsuccessful applications, team members will be on unpaid leave.

“A number of team members will regrettably be retrenched based on the Last In-First Out (LIFO) process, ” said the April 29 dated letter.

The hotel urged its staff to apply for claims from the Employee Insurance System (EIS) through the Social Security Organisation.

It added that all remaining team members who do not fall under the above categories would remain as per the latest signed agreement (ie: 20% or 50% salary deduction).

The hotel thanked the staff for their continuous support and understanding during a difficult time brought upon by Covid-19.

“We are forced to make difficult decisions to ensure the continuity of the business and in order for the hotel to continue to operate, ” it said.

A survey by the Malaysian Association of Hotels (MAH) revealed that about 15% of the hotels in the country may have to shut down due to Covid-19 pandemic.

In Ipoh, Syeun Hotel became the latest to suffer from the serious impact of Covid-19 when it sent out a notice to all staff stating that the hotel will cease operations on May 31.The notice, dated April 30, had been circulated widely on WhatsApp and when contacted, the hotel’s business development manager, Nooris Waty Ismail confirmed it.“The hotel will be closed permanently. Our last day will be on May 31, ” she said adding the hotel has 155 staff members.

The notice, signed by its director Loh Sow Chee, said the company had been facing difficulties in the last three years even before the movement control order (MCO) was enforced.

It said since then, they were unable to conduct business and with the MCO being further extended it might take longer for them to do so.

“Even after the MCO is lifted, it would be highly unlikely that the tourism industry will recover in the very near future.

“A sharp decline in demand for hotel accommodation and our other facilities caused a drop in sales turnover to a significant low where we could not afford to stretch our financial capabilities, ” said the letter.The hotel management said an arrangement would be made to pay the staff their salaries up to and including May 31 plus other applicable remuneration.

The company will also pay the staff the retrenchment benefit in accordance with the Employment Act 1955 – Employment (Termination and Lay-Off Benefits) Regulation 1980.

Syeun Hotel was officially opened in October 1993 and is one of the oldest hotels in the city.

Earlier this month, it was reported that Tower Regency Hotel and Kinta Riverfront Hotel and Suites will cease operations at the end of April.

Many staff jobless after Melaka hotels close down 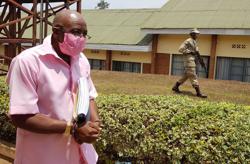 'Hotel Rwanda' inspiration tells court he did not direct attacks