Day in court: Fuziah arriving at the Johor Baru Magistrate Court with her husband Russly.

JOHOR BARU: Kuantan MP Fuziah Salleh was charged at the Magistrate’s Court here for allegedly making a statement that could cause public fear via her Facebook page.

The 61-year-old former deputy minister nodded her head and pleaded not guilty after a court interpreter read out the charge to her in front of magistrate R. Salini yesterday.

The offence was allegedly committed in Jalan Tasek Utara Kuarters, Taman Imigresen, Johor Baru at about 10pm on April 9.

The accused had allegedly come out with a statement using the Facebook account under the name “Fuziah Salleh” with the link https://www.facebook.com/YBFuziahSalleh that could cause fear or alarm to the public.

The act is an offence under Section 505(b) of the Penal Code which carries imprisonment of up to two years, a fine or both, upon conviction.

The court then set June 16 for re-mention.

Earlier, during the proceeding, Hassan pleaded to the court for the case to be dropped, saying his client had been “ambushed” because she was not given notice to appear in the court to be charged under Section 505(b) of the Penal Code.

However, DPP Nor Azizah said the notice was given to the accused on Tuesday, which stated that she would be charged under Section 505(b) of the Penal Code.

Fuziah, who wore a maroon baju kurung, arrived at the court lobby at about 8.20am accompanied by her husband Russly Abdul Rahman, 63.

It was reported that Bukit Aman had already taken Fuziah’s statement in relation to the case.

Bukit Aman CID director Comm Datuk Huzir Mohamed had said investigations began on April 10 after the police were alerted to a video that was said to have been uploaded on Fuziah’s Facebook page, claiming there was a flood of Malaysians at Bangunan Sultan Iskandar Customs, Immigration and Quarantine Complex in Johor Baru.

“The Johor Immigration Department director denied the incident and lodged a report on the matter, ” he said. 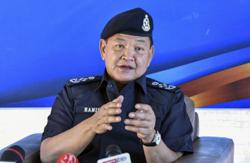