KUANTAN: The Kuantan Municipal Council's (MPK) latest restriction order on most eateries here for the Ramadan month has brought on another round of gripes from operators and consumers.

In a notice dated April 23, MPK said food premises operating out of shoplots were allowed to conduct sales by takeaway, drive-through or cash on delivery, from noon to 7pm only.

However, fast food restaurants were allowed to operate from noon to midnight.

Previously, all eateries were operating from 7am to 7pm during the movement control order period.

On April 12, this was restricted to restaurants within shoplots as all businesses in the hawker category including warung, stalls and static hawkers were not allowed to operate in Kuantan.

Facebook user Wan Zack Zaharin asked why there had to be such discrimination in opening hours between fast food restaurants and ordinary eateries.

"If this is to avoid Covid-19, it will only add on to the congestion because people are going to crowd fast food restaurants after 7pm. Is MPK also encouraging single people to sahur with fast food every day?" he asked on MPK's page.

Eric Pan questioned why restrictions were getting tighter in Pahang when the government was easing up on the business sector.

"People working in the morning don't need to eat breakfast if all food premises start operations from noon," he said.

Others asked MPK to reconsider letting warung and food stalls operate as they were also looking for income.

Meanwhile, Semambu assemblyman Lee Chean Chung had proposed to MPK to maintain opening hours from 7am to 7pm for non-Muslim food premises.

He said from a public health standpoint, the coordination of opening hours for non-Muslim and Muslim premises would only increase the risk of Covid-19 spreading because it was encouraging Kuantan folk to come out at the same time.

"The lives of non-Muslim residents are still going on the same during the Ramadan month.

"Ah Meng still has to takeaway breakfast for his family. Mei Ling as an eatery operator still has to depend on morning revenue to sustain rental costs during this difficult time," he said.

Lee said some of MPK's decisions were narrow-minded and did not consider the needs of the pluralistic community in Kuantan.

"Harmony and mutual respect have been long-time practices in Kuantan.

"MPK should have listened to the views of the different layers of the community before making an important decision. An inclusive approach would have helped build a municipal council (and city council to come) for all," he said.

Lee added that he had requested MPK to make a decision soon and not let the people and operators wait as they were already suffering. I have received PKR letter of demand for RM10mil, says Saifuddin 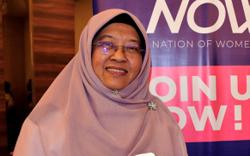 Haniza says yet to receive RM10mil letter of demand from PKR, ready to go to court