Ismail Sabri: Applications to travel back to cities can be made starting April 25

PETALING JAYA: Those who wish to travel back to major cities can apply to do so using the Gerak Malaysia app or by going to the nearest police station from April 25 onwards, says Senior Minister Datuk Seri Ismail Sabri Yaakob.

He said before the movement control order (MCO) was implemented, many Malaysians working in Kuala Lumpur, for example, had returned to their hometowns.

He said the government understood that they may now need to return to the city where they work, and the option to allow them to return was being studied.

“For the early stages, they can apply to the police through the online application Gerak Malaysia, a collaboration between the police and the Communications and Multimedia Ministry, from April 25 onwards, ” said Ismail.

Applications can be made online, providing details like their names, the number of family members, and where they are now, so it can be established whether they are travelling from red or green zones, he said in his daily briefing on Wednesday (April 22).

Ismail, who is also Defence Minister, added that those who are unable to apply online can do so at the nearest police station.

"It does not need to be a district police station, any small police station would do for them to apply and give personal details.

However, Ismail said that the option to return was still being studied.

“Even if people are able to return, I believe this will happen after May 1. We are still in the study phase and there is no guarantee because we are still waiting for reports.

"When applications to the police stations start on April 25, we will be able to see how many people want to return home and then we can plan and initiate a standard operating procedure (SOP)," he said.

Ismail said that this SOP would be different for students in universities who want to return home.

He said this was because the government knew how many students were still in universities and what their current health status was, making it easier to plan to allow them to return home.

But he said the number of Malaysians still in their hometowns was still unknown and these people were scattered.

"Students from universities – we can get them home by bus, but those from their hometowns, we won't be providing buses," he said.

No mass return of M'sians from S'pore yet, says Ismail Sabri 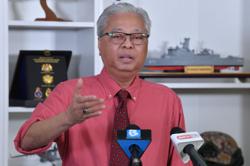