KUANTAN: The Russian Embassy has expressed its gratitude to the Temerloh police for assisting a stranded Russian backpacker.

In a letter addressed to the Temerloh district police headquarters, the embassy presented its compliments for assistance rendered to Maxim Lapin (pic,in orange), who was seen asking for help in the district on Wednesday (April 15).

In a letter dated April 16, the embassy said it was complimenting the Temerloh police on its performance, skills, knowledge and the smooth coordination of all officials responsible for this case.

"We understand the hardship the police are facing to maintain public security and the movement control order.

"Thank you once again! Take good care of yourself in performing your duty," read the letter which was shared on the Temerloh police's Facebook page.

Photos of Lapin sitting outside a fast food restaurant in Temerloh asking for help were shared on social media on Wednesday (April 15).

The 42-year-old cargo engineer from Moscow was holding up a cardboard sign reading "I can't go home and have no money. I need food".

When the movement control order (MCO) was enforced, Lapin was in Kuantan and had tried to return to Russia, but his flight ticket was cancelled and he failed to contact his friends.

Lapin was believed to have hitched a ride on a lorry heading towards Kuala Lumpur but was dropped off in Temerloh.

Police later found him wandering in front of a supermarket before taking him for Covid-19 screening.

He was then brought to the Russian Embassy in Kuala Lumpur on Thursday (April 16) morning.

Temerloh police chief Asst Comm Mohd Yusri Othman also thanked the public for passing on the information and helping the police in their effort. 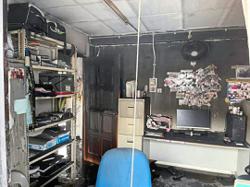