PETALING JAYA: Health director-general Datuk Dr Noor Hisham Abdullah is among the “top doctors” in the world named by a Chinese TV station for his approach in handling the Covid-19 pandemic.

According to a report from China Global TV Network (CGTN), Dr Hisham is one of the three leading doctors in the fight to stop the spread of the Covid-19 virus, along with the US' infectious disease expert Dr Anthony Fauci and New Zealand’s director-general of health Ashley Bloomfield.

The three have received praise over the weeks for being "calm, clear and trustable” sources of information and facts for their countrymen during the pandemic.

"None of them are cabinet ministers but all three have emerged as the face of their country's response to Covid-19," said CGTN.

It said the three had emerged to become household names, and have been called heartthrobs, rock stars and national heroes on social media, print and TV.

"Amid an unprecedented global pandemic and as governments worldwide have sometimes been slow to react, introducing confusing measures and sending contradictory messages, Dr Fauci, Dr Bloomfield and Dr Hisham have become voices of reason and sources of calm and reassurance," CGTN said.

Dr Hisham, 57, who has been the Health director-general since 2013, has been dubbed a “trusted face” by Malaysians, thanks to his consistent updates on the virus on his social media platforms, relying on facts and figures to make decisions and inform the public.

He has been updating the public on social media late into the night, way past working hours.

CGTN said his "low-key image and unassuming air" contributed to Dr Hisham's appeal, while Bloomfield is described as the quintessential civil servant.

Dr Hisham, who has a Masters in Surgery and Medical degree from Universiti Kebangsaan Malaysia, joined the civil service as a medical officer way back in August 1988.

He went on to specialise in endocrine surgery and did his training in various universities in Adelaide and Sydney, Australia. He has published in many local and international journals and written textbook chapters on endocrine surgery.

Dr Fauci and Bloomfield have also been calming and informative influences in their countries, as both men have consistently kept the public updated, giving interviews whenever possible and working long hours as well.

Dr Fauci, 79, is reported to be working nearly 16 to 18 hours a day for the past few weeks, prompting people to be worry whenever they don’t see him during a White House briefing.

Bloomfield has received extensive praise for his “diligent” and “clear” responses when speaking with the press, with many of his countrymen petitioning for him to be named as “New Zealander of the Year”.

Fans of Dr Fauci and Bloomfield have even gone to the extent of setting up fan accounts on social media.

Dr Fauci has been dubbed a “coronavirus crush” and “national treasure” by The Atlantic and The New York Times, with nearly 15,000 people also signing a Change.org petition to get him voted as People Magazine’s Sexiest Man Alive 2020.

Dr Hisham’s admirers aren’t as googly-eyed but make it a point to thank and praise him, saying that “Malaysia is lucky to have” him. 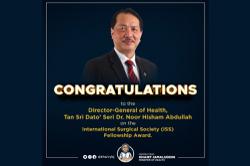