Lower demand: Choong estimates that about 30-50% of fruits produced have to be dumped as they have gone bad during the MCO.

DESPITE the difficulty faced by farmers over the movement control order (MCO), it is important that farmers continue to plant, stresses Kuala Lumpur and Selangor Fruit Farmers Association (KLSFFA) chairman Jeffrey Choong. This is to ensure food security in the near future, says Choong: “We would like to request farmers not to stop planting, they need to continue. Otherwise, there might

be a shortage.” He predicts that if farmers do not continue to plant over the MCO, there is a possibility that there will be fewer supply of fruits in the coming three months to a year. “Some workers also do not want to work at this time as they are afraid [of Covid-19]. We have offered to pay them more but some of them are still worried, and of course I cannot force them,” he explains. “There are also fewer packing staff. We are facing this problem.”Choong adds that some farmers choose not to plant due to other issues like difficulty securing the necessary machinery, piping and irrigation hardware, or accessing fertiliser.

On April 3, Deputy Agriculture and Food Industries Minister I, Datuk Seri Ahmad Hamzah assured the public that there will be enough supply of food and agricultural produce during the MCO as the government has implemented measures to ensure that the supply chain would not be disrupted. The government has also said that food supply sectors and its chain of essential services can operate as usual.

On a positive note, problems on the distribution of produce that farmers faced at the beginning of the MCO have now been resolved, Choong notes.

Initially there was some confusion due to communication issues but these have been ironed out.

“There are no more issues with access as [ Agriculture and Food Industry Minister Datuk Seri Dr Ronald Kiandee] has clarified it,” he says.

However, other barriers are still there. “There are many fruits that cannot be sold, for example papayas and watermelons. We can pick the fruits but there is not enough transportation to move the produce,” he says.

Choong gives examples of lorries which require repair and maintenance but cannot be fixed as many vehicle repair shops are either closed or only partially open, and spare parts are limited due to the MCO.

“Some fruits do not last long, and if they don’t arrive on time we have to dispose of them,” he says.

Demand has also slowed as hawker centres, restaurants and shops have closed or are operating in limited hours over the MCO. Members of the public are also afraid to go out to purchase the items, he adds.

Choong estimates that about 30-50% of fruits produced have to be disposed of as they have gone bad.

He proposes for government agencies like the Federal Agricultural Marketing Authority (Fama) to purchase unsold fruits and vegetables from farmers and distribute them to frontliners and the needy.“We feel this will help both farmers and society,” says Choong.Federation of Malaysian Vegetable Farmers Association president Tan So Tiok meanwhile has requested for a targeted stimulus package to assist farmers who are badly affected over the MCO following the spread of Covid-19.

“Vegetable farmers had to dispose of 20-30% of our produce. We have also donated some to the needy,” he says.

If conditions do not improve, vegetable farmers stand to face a total loss of RM22.75mil within the first 28 days of MCO, Tan had said in a letter to the Agriculture Department dated March 30. The letter also included a plea for the government to provide an incentive on vegetable production of RM90 per metric ton, as the incentive given by the government in 2008 of RM81 per metric ton had greatly reduced farmers’ burdens. Under the recently unveiled special stimulus package worth RM10bil aimed at small and medium-sized enterprises (SMEs) in a bid to soften the impact of the MCO, only farmers who are registered as SMEs will get financial assistance. The Bantuan Prihatin Nasional cash aid, however, is available for individual farmers based on their income levels.

On Monday, the Perak government launched its RM1mil AgroPrihatin scheme to help farmers.

“Demand is less at this time, and the hours of operation of shops and restaurants are also shorter. Many wet markets and night markets are also not operating,” says Tan.

Despite the temporary wastage, Tan nevertheless echoes the advice of Choong for farmers to continue planting crops.

“We hope that farmers will not cut production as there may not be enough fresh produce for the market in future. Hari Raya Puasa is coming up, and demand usually increases then,” he says.

“It will be difficult to increase import as other countries are also limiting their export. Covid-19 really does impact the market.” 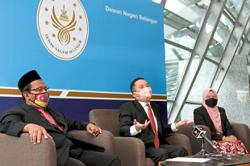