Federal Territories Minister Tan Sri Annuar Musa said 49 cases had been identified at the Malayan Mansion and Selangor Mansion, while 30 cases were recorded at Menara City One.

“This is a worrying situation as this is a significant number of cases in a small locality.

“We ask that the residents fully comply with the authorities’ guidelines and instructions, ” he said during a press conference that was streamed live on his ministry's Facebook page on Friday (April 10).

Annuar added that he had met with representatives of the respective foreign missions earlier on Friday, as 97% of residents at the Selangor Mansion and Malayan Mansion are foreigners.

“I met with them, together with Wisma Putra, to look into the welfare of their citizens living in those buildings.

“We would like to thank those who have come forward to help feed some 2,000 residents at the two buildings, ” he added.

Helping out are NGOs such as the Malaysia Telugu Foundation, Jawi Food Bank, Yayasan Permai and other private companies.

Sitting in the heart of the city, the two blocks of 240 units are dilapidated and dirty despite being on prime land, with some popular jewellery, money-changing outlets and boutiques on their ground floor.

The two blocks were placed under enhanced MCO on Tuesday (April 7) after 15 positive Covid-19 cases were recorded.

Meanwhile, updating the situation in the Federal Territory, Annuar said that six of the 12 parliament constituencies in Kuala Lumpur and Putrajaya were now red zones.

The latest updates from the Health Ministry show that two of the three Federal Territories are now Covid-19 red zones.

The health district of Putrajaya is the latest to be declared a red zone with 47 cases.

Labuan remains in the yellow zone with 13 cases reported. 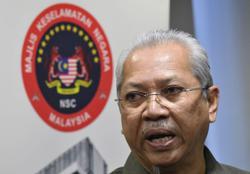