JOHOR BARU: Police have arrested 20 individuals, including seven foreigners, for using a condominium as an entertainment and gambling centre.

Johor police chief Comm Datuk Ayob Khan Mydin Pitchay said the individuals, aged between 19 and 66, were arrested following two raids on a condominium in Johor Baru on Thursday (April 9) at about noon.

"The suspects include 13 local men, a Singaporean man, a Thai man and five Vietnamese women.

"Investigations reveal that the syndicate's modus operandi was to transform condominium units into entertainment and gambling centres during the MCO period.

He added that seven of the suspects had criminal records related to drugs, gambling, prostitution and criminal activities while 12 tested positive for drugs.

"We have also seized two speakers, two televisions, two microphones, RM56,400 in cash, 52 pieces of cards, more than 34g of ketamine as well as about 17g of syabu," Comm Ayob said.

He said the case was being investigated under Section 6(1) of the Common Gaming Houses Act 1953, which provides for fines up to RM5,000 or jail up to six months or both if found guilty.

"The case is also being investigated under Rule 11 of the Prevention and Control of Infectious Diseases Act 2020, where they could face fines up to RM1,000 or up to six months' jail sentence or both if convicted.

"For suspects who are foreigners, they will also be investigated under Section 6(1)(c) of the Immigration Act 1959/53," he said.

He added that the drugs offences are being investigated under Section 12(2) and Section 15(1) of the Dangerous Drugs Act 1952. 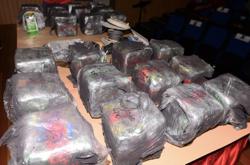