He said that all oil companies including Petronas has been informed of the state’s decision, which would take effect immediately.

Sabah, he said, had always been in discussions about the state sales tax with the previous federal government under Tun Dr Mahathir Mohamad.

“Dr Mahathir told me to hang on for a while as there were financial constraints (facing the country) and that it would also affect Petronas at the same time, ” said Shafie, whose Parti Warisan Sabah became an opposition state to the Federal Government after Perikatan Nasional took over.

Speaking to reporters yesterday, Shafie said he had since discussed with the oil companies and they were okay with the state’s plan to impose the 5% sales tax.

“So long as we spell out our plans, they are okay. They don’t want short term or u-turn in policies. They need us to be clear for them to plan properly, ” he said.

Earlier this month, a letter from the state Finance Ministry informed oil companies that they were imposing a 5% sales tax on petroleum and natural gas products, effective April 1.

The tax was being implemented under Section 10(1) of the State Sales Tax Enactment 1988 and the petroleum companies were to obtain necessary licences to allow for the sale of the petroleum products.

Under the enactment, these companies could face a RM50,000 fine or jail up to three years or both if they failed to register.

Petronas was among nine petroleum companies issued with the letter.

Sarawak, which was in the opposition under the Pakatan Harapan government, imposed the state sales tax on Jan 1,2019.

Petronas, on March 13, lost its bid for a judicial review of Sarawak’s sales tax on petroleum products when the High Court ruled that the state had the right to impose state sales tax under the constitution.

The move by Sabah and Sarawak to impose the state sales tax came on the back of the federal government’s reluctance to increase oil royalties from 5% to 20%. 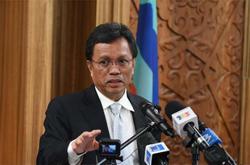