SIBU: A supervisor of a company here was cheated of RM8,000 by a man who said he was her brother and needed a loan.

Sibu OCPD Asst Comm Stanley Jonathan Ringgit said on Monday (April 6), the 24-year-old victim was at work when someone called her.

"The man introduced himself as her younger brother working in Singapore.

"The complainant thought it was her brother as the suspect's voice sounded exactly like his," he said.

ACP Stanley added that the suspect told the complainant that he would be coming back to the country and needed to borrow RM8,000 from her as he wanted to start a business here together with a friend.

"The suspect asked her to transfer the money to his friend's account as his account had problems receiving deposits," he said.

The complainant then asked her husband to transfer said amount to an account number provided by the suspect on the same day.

"At about 5.38pm, the complainant texted her brother telling him that the money had been transferred to his account," he disclosed.

However, she was shocked when told that he had not contacted her or asked for money.

The case, he said, is being investigated under Section 420 of the Penal Code for cheating. 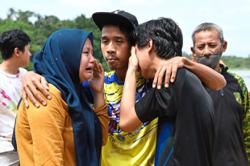