The minister said most of the residents at the Selangor Mansion and Malayan Mansion flats on Jalan Masjid India here are from Pakistan, India and Bangladesh and the would cooperate with the respective embassies.

"We will cooperate with them and replay information on the enhanced MCO to the residents.

"We will also include the representatives from the embassies in the ministry's security meetings," he told reporters after visiting the affected area on Tuesday (April 7).

Information on the enhanced MCO will be broadcast via loud hailers to the residents in languages used by the three nationalities, he added.

"We hope all residents in the two flats give their full cooperation. All the residents are deemed as "person under investigation" (PUI) for Covid-19," Annuar said.

Ninety people were tested on Monday (April 6) and 300 more will undergo the same process on Tuesday (April 7), he added.

"We have 15 positive cases from the area so far," he said.

On the possibility that residents will be relocated due to overcrowding, Annuar said it would depend on whether the number of cases spike and if Health Ministry officials recommend it.

"We have information that there are 20 to 30 people staying in some units.

"On normal days, those who work the day shift will be out and the night shift will be home, but during the enhanced MCO, everyone will be at home. 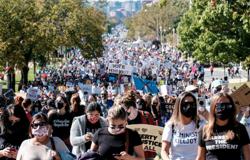