KUALA LUMPUR: A total of 19 individuals are expected to be charged on Wednesday (April 8) at a Kajang Magistrate’s Court over their alleged involvement in a “wild party” during the movement control order (MCO).

A source said two minors were among those who would be charged.

It was reported that a group of 19 was detained by the police in a raid at a wild party held at a condominium in Taming Jaya, Kajang on April 3.

Speaking at the time, Kajang district OCPD Asst Comm Ahmad Dzaffir Mohd Yussof said the police received a complaint from the public on a noisy gathering at the condominium unit, adding that this led to the police raiding the place at 12.30pm.

The group was subsequently remanded for four days at the Kajang police district headquarters, and ACP Dzaffir said an investigation was carried out under Section 268 of the Penal Code and Section 22(b) of the Prevention and Control of Infectious Diseases 1988. 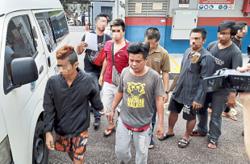