LANGKAWI: A boat with some 250 Rohingya refugees on board reached the shore near Langkawi's Ritz Carlton Hotel in the wee hours of Sunday morning (April 5).

A nearby villager, who declined to be named, said the wooden boat arrived around 5am on Sunday (April 5). The authorities are currently working to cordon off the refugees at the beach.

"There were about 250 of them. One hundred of them were still in the water attempting to swim to the shore.

"The rest still remained on the boat," said the villager.

He added that so far about of 100 of them had been rounded up. The MMEA, in a WhatsApp message to the media, said the agency was still investigating the incident while declining to give further information for the time being.

On April 3,2018, The Star reported the MMEA had reportedly detained a boat carrying dozens of Rohingya refugees in the waters off Langkawi.

In the report, about 56 women, men and children on board were being taken to the maritime base in Bukit Malut. 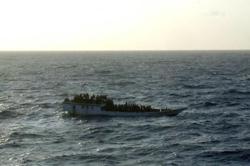