He said this following a joint air surveillance done from Kota Kinabalu to Labuan by the police and MMEA which found that most fishing communities and resorts complied with the MCO.

“We did not see any active fishing activities. except for traditional fishermen fishing closer to the coast for their daily needs. The resorts looked quiet, and no sea activities were taking place, ” said Mohd Rosli.

At a later visit to the Sabah Fish Marketing Sdn Bhd (SAFMA) market here, fishermen coming to sell their catch told him that the amount caught was normal and enough for the local demand. 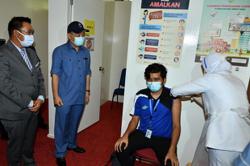