PETALING JAYA: The business sector is in desperate need of a boost and the government needs to introduce a 'special stimulus package' to prevent it from collapsing, says Huazong president Tan Sri TC Goh.

He said this was necessary in the event of a further extension of the ongoing Movement Control Order (MCO) should the Covid-19 situation in the country worsen.

He said the 'Prihatin Rakyat Economic Stimulus Package' unveiled on Friday did not benefit the private business sector, including the majority of the small-and-medium enterprises (SMEs), limited companies, public listed companies and their subsidiaries.

He said they were currently in a dire situation of "unprecedented magnitude" with many on the brink of collapsing.

"Seriously speaking, what the business sector received from the government is just a series of 'stop-gap measures', and not an 'aid measures'," he said in a statement on Sunday (March 29)

This assistance he said included extension for payments of corporate taxes, exclusion of levy payments to Human Resource Development Fund for all sectors for six months beginning April, and allowing both the employers and employees to defer and to restructure Employees Provident Fund (EPF) contributions.

As for the concessions provided by the Bank Negara through financial institutions, this should include additional loan facilities at low interest rates in addition to extensions or restructuring of loan repayments.

He said it was commendable for the government to take care of the people of all walks of life and give out cash aid and continue to pay full salaries and provide allowances for civil servants.

"However, the government disallowed employers to lay-off workers or deduct their wages.

"This certainly does not help the business sector to overcome the dreadful situation. When the employers themselves are in a helpless situation, how then can they help others?" he said.

He said based on the feedback gathered, Huazong has come out with a 10-point proposal for the government to consider.

This included setting up a special committee made up of several ministries and agencies to quickly conduct a brainstorming session and roll a 'special stimulus package' for the private sector.

Goh also called on the government to formulate and introduce effective post-pandemic measures to better assist the various industries and sectors, and to consider reducing interest rates for bank loans guaranteed by the Bank Negara during this period.

He also hoped the government would consider temporary halting the employees' EPF contribution for a period of 12 months rather than allowing them to withdraw RM500 from the second account, every month.

He also called for the temporary cancellation of the Sales and Services Tax (SST) for at least one year. 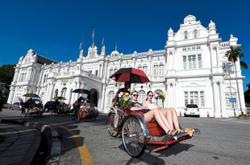