Reduced hours at CIQS at Sabah-Sarawak border for MCO (corrected)

KOTA KINABALU: The Customs Immigration Quarantine and Security (CIQS) at Sindumin-Merapok on the borders of Sabah and Sarawak will only operate from 6am to 8pm daily until further notice.

State secretary Datuk Safar Untong (pic) said the new CIQS operating hours takes effect Sunday (March 22) in line with the nation’s effort to curb the spread of the virus that has claimed nine lives including one in Sabah as at noon Sunday (March 22).

He said there was no need to worry about food supplies running low as food processing factories and transport services are still allowed to operate as usual.

Meanwhile, railroad services have been rescheduled to meet the MCO, he said.

“Routes from Kota Kinabalu to Beaufort and Halogilat to Rayoh, and vice versa, have ceased for the time being, ” Safar said.

He said the Beaufort-Halogilat route, to and for, operates at 7.50am and 4.30pm each.

As for trips from Rayoh to Tenom and vice versa, passengers still can use the service at 7.50am and 4pm daily, he said.

Safar urged all local authorities to help ensure the smooth implementation of the MCO.

He reminded the public to abide by all rules throughout the MCO and to heed instructions or orders given by authorities at roadblocks aimed at enforcing the order.

A previous version of this story incorrectly stated the CIQS would be closed. 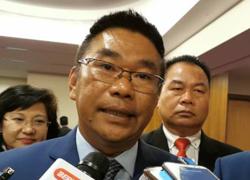