GEORGE TOWN: From vacant car parks and empty supermarket shelves to a subdued morning rush hour, Penang is facing the next level of the Covid-19 fallout since the state reported its first Covid-19 patient.

The economic blow is expected to worsen because many large scale public events were cancelled or postponed, including a conference of about 18,000 attendees from 64 countries who were supposed to fly in next month.

Almost 10,000 workers from three multinational corporations here were told to work from home and that was enough to reduce the daily traffic to Bayan Lepas Free Industrial Zone.

The open-air car parks of Keysight Technologies and Agilent Technologies were all but devoid of cars. It was the same scenario at the multistorey car park of Motorola Solutions Penang.

It was learned that an employee of Keysight Technologies was a close contact of the Motorola engineer who was the first confirmed Covid-19 case in Penang recorded on Tuesday.

Although that Keysight employee had not displayed flu symptoms, the MNC took no chances and ordered the workforce to work from home starting yesterday until further notice. Agilent closed likewise because it shares the cafeteria with Keysight.

While Penang’s manufacturing sector has taken the first direct hit from Covid-19, its tourism sector is taking a blow too.

An annual corporate event in Penang called V Conference was postponed to the third or fourth quarter this year.

“It would have seen 12,000 to 18,000 attendees coming next month. This would have been a big benefit to our tourism players, ” said Penang Convention and Exhibition Bureau chief executive officer Ashwin Gunasekeran.

He said the attendees would have come from 64 countries but some of them cannot enter Malaysia because of travel bans.

Ashwin said many other private conferences and events were also postponed at least until later this year. 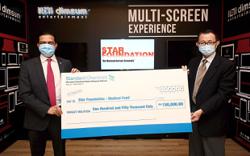