In a message in conjunction with International Women's Day on Sunday (March 8), the Deputy Chief Minister said women in Sabah were accorded a fair deal under the state civil service.

"I am proud to see that more Sabah women are holding senior positions in the hierarchy of the state administration based on merit and experience.

"They were promoted accordingly after the new state coalition came to power less than two years ago.

"Also with more women graduates joining the workforce, I am sure those who choose a career in public service will be in the forefront one day," the Sabah Pakatan Harapan chairman and state PKR chief said in her message.

Liew, who is also state Tourism, Culture and Environment Minister, noted there were four women permanent secretaries serving in the state ministries.

She also mentioned many women holding the post of directors and deputy directors of various state government departments.

Liew noted that women who excelled in the private sector are achievers too in their own right.

While lauding the Sabah Women's Advisory Council (MPWS) and Sabah Women's Affairs Department (JHEWA) for their good work in providing women empowerment programmes, Liew believes more can be done to bridge the economic gap between urban women and their rural sisters.

"I know they have the ability to do more so I ask them to keep the momentum going.

"Although taking charge of women's affairs is not my portfolio, as a woman Deputy Chief Minister, I would be happy to support women in whatever way possible through my ministerial capacity," said Liew.

In relation to that, she reminded all working women and home-makers not to neglect their health while pursuing their careers or managing their families.

"Health comes first. No matter how preoccupied you may be, do make time for regular health screening for your own good and that of your families," she added. 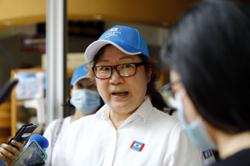