HONG Kong actress Carina Lau Kar-ling has teamed up with several friends to distribute rice and masks to the needy at a shelter, Sin Chew Daily reported.

She also spent several hours playing games and dancing with residents of the shelter who suffered from intellectual disabilities.

Lau, 54, who is married to actor Tony Leung, spoke of how she had benefited from the event.

She said the residents showed her the joy about the simple things in life.

“I need to learn from them and practise it in my daily life, ” she said.

> Social influencer Bella Su, the girlfriend of Taiwanese model-actor Godfrey Gao who died during the filming of a reality show last November, has posted a picture of them on Instagram exactly three months after his tragic death.

A message “I am right here right now” was superimposed on the photo, reported Oriental Daily.

Gao, 35, was said to have worked for almost 17 hours straight before he collapsed.

In another posting on Instagram Story, the 23-year-old Su penned down her thoughts about Gao’s death.

“Be the best version of yourself. Be the girl you (Gao) can be proud of, ” wrote Su. 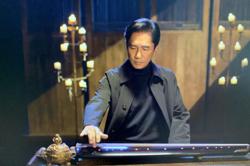