Palace: Muhyiddin to be sworn in as PM (updated)

PETALING JAYA: Tan Sri Muhyiddin Yassin will be sworn in as the eighth prime minister at 10.30am tomorrow (March 1), Istana Negara has announced.

The announcement of the 72-year-old Pagoh MP comes after an intense week of political upheaval over who will be the next premier.

According to the statement by Comptroller of the Royal Household Datuk Ahmad Fadil Shamsuddin, the Yang di-Pertuan Agung had received a list of names of potential candidates.

“Upon getting the representation from all parties’ representatives and independent MPs, it is in the opinion of Yang di-Pertuan Agong that the one who most likely to have received the trust of the majority of MPs is the Pagoh MP, Muhyiddin.

“In line with that, the Yang di-Pertuan Agong will appoint Muhyiddin as the Prime Minister in accordance with Articles 40(2)(a) and 43(2)(a) of the Federal Constitution.

“The Yang di-Pertuan Agong said that the appointment of the Prime Minister cannot be further delayed as the country needs a government for the well-being of the people and the country that we love.

“His Majesty said that this is the best decision for all and hopes that the political upheaval can be ended, ” said Fadil in a statement Saturday (Feb 29).

Muhyiddin, who was born in Pagoh, on May 15,1947, has a Bachelor's Degree in Economics and Malay Studies from Universiti Malaya.

He joined Umno in 1978 before crossing over to Parti Pribumi Bersatu Malaysia in 2016 and becoming its president.

He held the Johor Mentri Besar post for 10 years before becoming a minister during the Barisan Nasional administration.

He was the deputy prime minister during the premiership of Tun Abdullah Ahmad Badawi and Datuk Seri Najib Razak – the latter sacked him as deputy for raising questions over the 1Malaysia Development Bhd (1MDB) scandal.

The past one week has been fraught with intense political manoeuvrings that climaxed when Tun Dr Mahathir Mohamad resigned as prime minister, leading to the collapse of the Pakatan Harapan government.

This resulted in an impasse when parties could not agree on a single candidate for the post of prime minister.

Muhyiddin came in as the tug of war intensified between Dr Mahathir and his Pakatan-appointed successor, PKR president Datuk Seri Anwar Ibrahim, with both claiming they had the majority.

However, Muhyiddin was thrown in as the second choice and many who initially backed Dr Mahathir switched sides to Muhyiddin.

Anwar and all of Pakatan then decided to support Dr Mahathir, but ultimately, the numbers just didn’t add up.

Muhyiddin's house a hive of activity after announcement

Pakatan not giving up hope of Dr M remaining PM 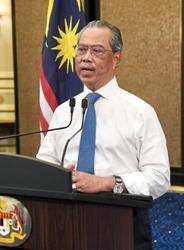