Eight walk out as free men

Released: Saminathan and Arivainthan (second from left) with their counsels, family members and friends after being acquitted and discharged at the High Court in Kuala Lumpur. With them is Kulasegaran (far right). — Bernama

Eight individuals accused of supporting the Liberation Tigers of Tamil Eelam (LTTE) terror group, including Gadek assemblyman G. Saminathan, have been freed by the High Court.

Saminathan, 35, who had been in detention since Oct 10 last year was freed before High Court judge Justice Datuk Muhammad Jamil Hussin, along with fellow accused, technician S. Arivainthan, 28.

The release of the eight individuals was done following the prosecution’s application to discontinue with the case against them, under the instruction of Attorney General Tan Sri Tommy Thomas.

Justice Jamil, in acquitting Saminathan and Arivainthan, acknowledged the prosecution had discontinued the cases so there was no prospect for the duo’s charges to be reinstated.

He also ruled for the trial dates that had been fixed earlier to be vacated.

Earlier, Deputy Public Prosecutor Mohd Farhan Aliff Ahmad, who handled the cases of the two, told the court the prosecution wished to stop the proceedings against the two accused in accordance with Section 254 of the Criminal Procedure Code (CPC).

Farhan said that this was in line with Thomas’ media statement last week related to the LTTE-related charges. 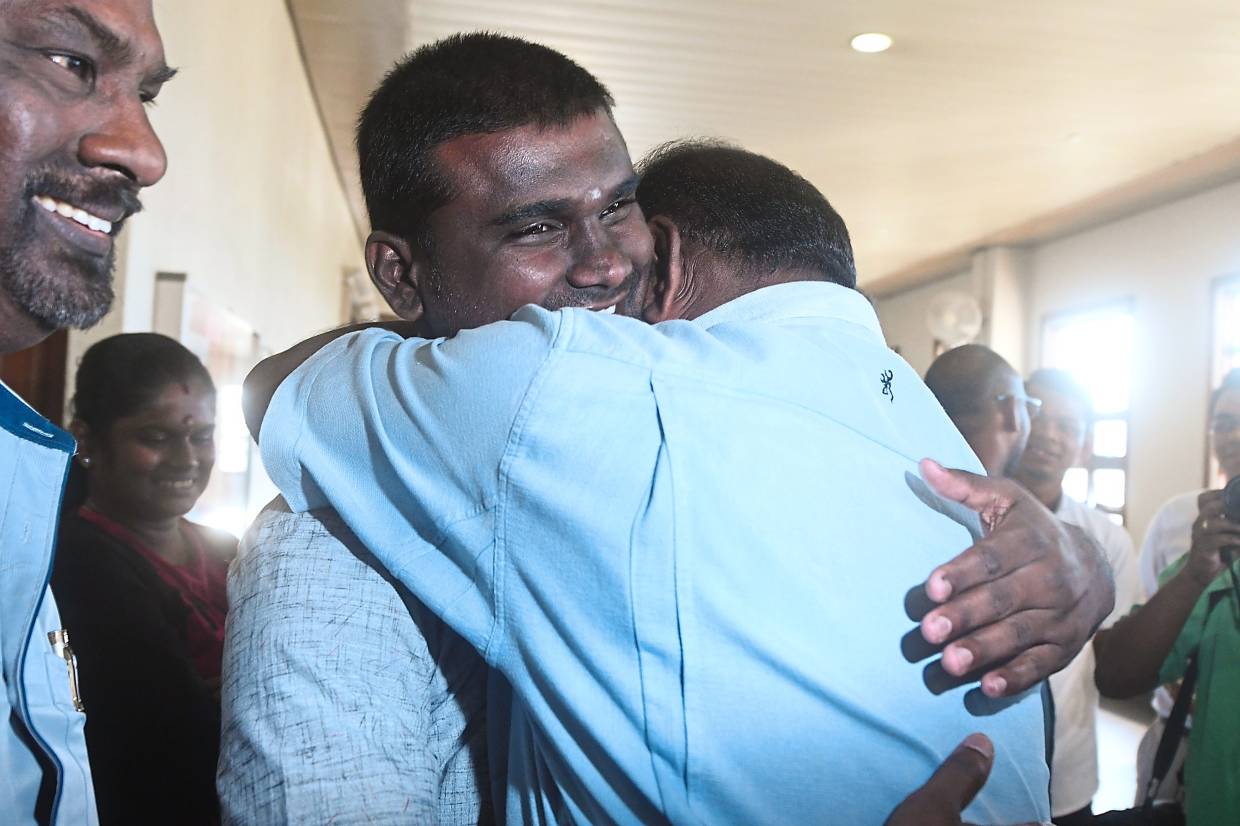 Huge relief: Saminathan being hugged after his acquittal at the High Court in Kuala Lumpur. (Bottom) Pumugan smiling while walking out of court a free man. — Bernama

Meanwhile, counsel Ramkarpal Singh, who was representing the two, said that since there were no reasonable grounds provided by the prosecution to discontinue the case, the proper order should be to acquit and discharge his clients.

“The facts of the cases are the same as with the case of P. Gunasekaran (Seremban Jaya assemblyman) who was discharged and acquitted by the High Court on Monday.

“There is no reason to give a different order, ” he said.

The two were also represented by Harshaan Zamani.

Kalaimughilan, Teeran, Chandru, and Sundra were acquitted and discharged by Judicial Commissioner Datuk Aslam Zainuddin on the same grounds in a separate court.

Family members and friends of the accused were seen outside the courtrooms waiting for them to be released, after more than four months of detention. 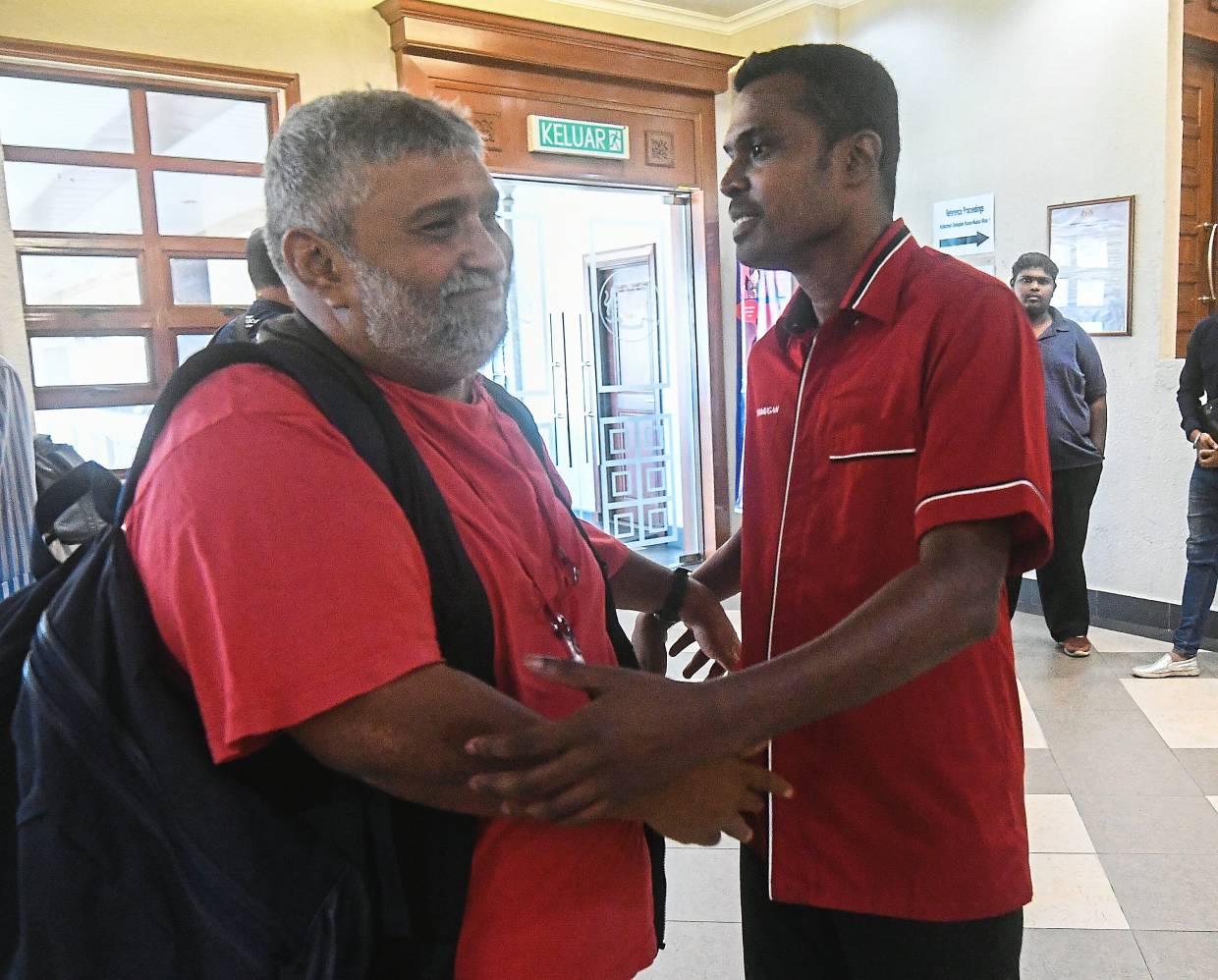 The eight individuals were charged with multiple counts of pledging their support to LTTE, which is classified as a terror group in the country, via their Facebook account and by attending events relating to the group, as well as possessing items related to the group.

They were charged with committing the offences between 2014 and 2019 at several locations in different states, including Perak, Melaka, and Penang.

S. Thanagaraj and B. Subramaniam, who were also accused alongside the eight, are expected to be freed today.

On Feb 21, Thomas dropped the charges against the 12 individuals accused of supporting LTTE, saying that there was “no realistic prospect of conviction for the dozen accused on any of the 34 charges”.

In a statement, he said that mere idol worshipping did not constitute a crime and explained that there must be sufficient evidence for prosecution to establish the crime “beyond reasonable doubt”.

All 12 individuals were first brought to court on Oct 31,2019, and were charged with supporting and possessing items related to the terror group.

They were denied bail as they were detained under the Security Offences (Special Measures) Act (Sosma) 2012.