KUALA LUMPUR: Top DAP leaders have arrived for an emergency meeting that began at noon at the party’s headquarters in Pudu.

DAP state representatives, as well as exco members, are also present at the meeting.

It is learned that DAP has ordered all of its elected representatives to be present at the emergency meeting, which is expected to be chaired by DAP secretary-general Lim Guan Eng.

Leaders were tight-lipped when approached by reporters regarding the agenda of the emergency meeting.

“All good, business as usual, ” said Howard Lee briefly when approached by reporters.

DAP’s headquarters were swarmed with reporters who were eager to wait for the outcome of the emergency meeting, which was called following the political developments on Sunday (Feb 23).

It is understood that the emergency meeting will discuss the future of DAP given the imminent collapse of Pakatan Harapan.

PKR and Gerakan are also having emergency meetings over the matter, while electoral watchdog Bersih 2.0 is set to hold a press conference later on Monday (Feb 24).

On Sunday, several key leaders of the ruling government parties and also from the Opposition attended a special meeting at a hotel in Petaling Jaya. It was a closed-door meeting, raising questions about its purpose.

Before that, there had been separate meetings involving several political parties amidst talk of a possible realignment of the country’s political landscape. 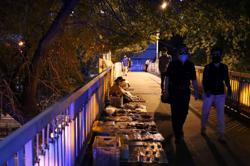