KUALA LUMPUR: High-impact and large-scale development projects involving every Malaysian will be tallied during the 2020 Population and Housing Census of Malaysia (Census 2020), beginning July 7.

According to a statement from the Economic Affairs Ministry’s Corporate Communications Unit, the census would cover nine million residences and involve about 33.8 million people.

The census themed - Your Data Our Future will adopt the “de jure” approach and the findings will be used as a key source in preparing national development plans.

The Statistic Department and the ministry have also carried out preparations for the Census 2020 since 2018, especially about mapping and listing of residences.

The statement said in order to ensure the census is carried out in a comprehensive and orderly manner, an early census would be carried out starting April involving several identified institutions.

Census 2020 is the 6th census conducted in the country.

Population census in Malaysia is undertaken once every 10 years and Malaysia is among the 54 countries that will carry out the census this year.

For further information about the Census 2020 visit www.mycensus.gov.my. — Bernama 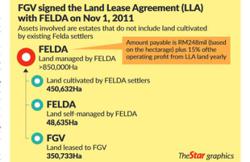