New plan to save elephants

KOTA KINABALU: A newly approved elephant conservation plan will provide in-depth study on the causes of some of the mysterious deaths, conservationist Dr Benoit Goossens said.

Under the conservation plan approved by the state government on Wednesday, he said they would be able to get an idea on the causes of deaths of the endangered Bornean pygmy elephants that had been puzzling investigators over the years.

“It will definitely give us an idea of what is causing the deaths, whether it is intentional poisoning or long-term poisoning, and what is poisoning them (whether it is fertilisers, pesticides or herbicides).

“And if there is something very specific that kills them, let’s make sure that this product is not used in plantations anymore (by banning the product),” he added.

Goossens, who is Danau Girang Field Centre director, together with fellow conservationists Dr Nurzhafarina Othman from Project Seratu Aatai and Dr Marc Ancrenaz from a French NGO named Hutan, are members of a task force who have helped the state put together the Sabah Elephant Action Plan 2020-29.

He said a thorough analysis of the epidemiological situation would be carried out with a focus on actions related to the potential poisoning issue.

This includes compiling and analysing all data collected by Sabah Wildlife Department and its other partners about recent elephant deaths while collaborating with national and international experts to determine the exact causes.

“We are also identifying and collaborating with national and international laboratories that can screen chemicals that could be responsible for elephant deaths,” he said.

They would also review the chemicals that are being used in plantations and other areas that could potentially be harmful to the animals.

Once they identify the major causes of elephant deaths, he said they would design and implement a set of actions that would minimise the elephants’ exposure to these harmful factors through a policy framework.

Goossens, who chairs the elephant task force group, said that many of the actions were already underway and that they were also looking at diseases that could be a threat to the elephants.

This was part of efforts for the welfare and health of the wild elephant population, he added.

About 60 elephants have died over the last 36 months, many of which were due to unknown causes of poisoning apart from poaching and natural causes. 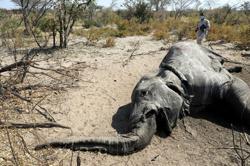