GEORGE TOWN: An attempt by a Myanmar man to sneak dried rat meat into the country was foiled by the authorities at the Penang International Airport.

Department of Malaysian Quarantine and Inspection Services (Maqis) director Zarina Ramli said they seized 780g of dried rat meat from the 30-year-old passenger, who had flown in from Bangkok, during a routine check at 8pm on Sunday.

“The man brought in dried rat meat without an import permit and a health certificate from the exporting country.

“The purpose of this veterinary health certificate is to make sure that the meat is free of diseases and viruses, ” she said yesterday.

On the same day, Maqis also confiscated 59.8kg of Thai harum manis brought in by a Thai passenger without any valid documents. 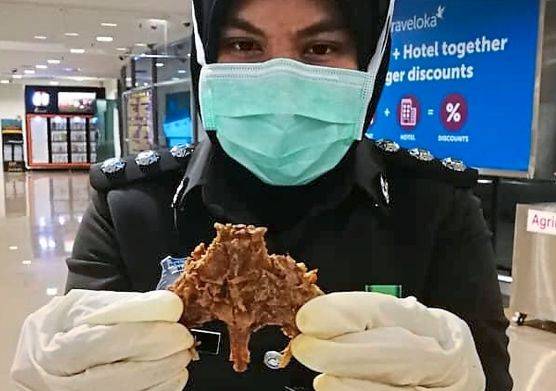 Tasty for some: A Maqis officer showing the confiscated 780g dried rat meat at the Penang International Airport.

“We confiscated the mangoes estimated to be worth RM2,565.68. The purpose of this import ban is to prevent the risk of the entry of pests such as mango beetles into Malaysia which could ruin the country’s mango industry.

“In addition to the import restrictions, the entry of mangoes through the airways is also prohibited, ” she added.