PETALING JAYA: US President Donald Trump must resign over the Middle East “deal of the century” and China should be brought in to support Palestine’s cause, says Prime Minister Tun Dr Mahathir Mohamad.

He said non-Muslim superpowers such as China, Japan and South Korea must condemn Israel’s oppression of the Palestinians as it was a human rights issue.

“Resign, Trump must resign, ” said Dr Mahathir to a question on what he would tell Trump over the Israel-Palestine peace deal.

On Jan 28, Trump had announced that part of the Middle East peace plan – dubbed the “deal of the century” – would include the United States’ recognition of Jerusalem as Israel’s “undivided capital” as well as recognition of Israeli sovereignty over territory that it envisaged under the plan as being part of Israel.

“I have spoken to the Japanese government on the issue of Palestinians but I have yet to speak to China. Maybe one day, I will.

“Religion has got nothing to do with this. These Palestinians are deprived of their human rights and even Japan and Korea must be concerned, ” he told reporters after launching the Third Annual Conference of the League of Parliamentarians for Al-Quds here yesterday.

Al-Quds is the Arabic name for Jerusalem.

“Legalising the illegal – that is the character of the bully. Just because of your strength, you bully.

“Israel by itself would lose but the US and Europe guarantee the Israelis would win.

“There was no referendum and they (Palestinians) were just pushed out from Palestine and massacred. This is gross injustice, ” said Dr Mahathir, adding that it was obvious the Israelis had learnt the wrong lessons from Adolf Hitler’s Holocaust which saw Jews being massacred and were now doing the same to the Palestinians.

Earlier, in his speech, Dr Mahathir said those who remained silent on the oppression had blood on their hands.

“In other words, if we, too, choose to be silent, the blood from the murders and killings of the Palestinians by the Israelis is on our hands as well, ” said Dr Mahathir.

He said platforms such as The League of Parliamentarians for Al-Quds, the Inter-Parliamentary Union, parliamentary blocs and others, could be more effective if they were to strategise and coordinate their efforts.

Separately, Dewan Rakyat Speaker Tan Sri Mohamad Ariff Md Yusof said the Malaysian Palestinian Friendship Committee in Parliament should work with other clusters of parliamentarians to champion the Palestinian cause.

By working together, he said the this would result in a joint force that would further convince other parliamentarians around the world that the issue of Palestine and Al-Quds were very important.

“A clear message must be sent that people who know and respect international law must take a different opinion on the many injustices in Palestine.

“It is important for parliamentarians across various countries to act as a joint collective community, ” he told reporters on the sidelines of the conference. 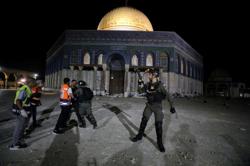 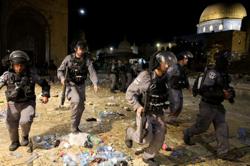