SUNGAI PETANI: Environmentalists have sounded the alarm after a second illegal dumping site was discovered along Sungai Muda, which provides the main source of water to the northern region.

Six months ago, The Star reported about an illegal dumping ground at Kampung Kemumbung in Sidam Kiri where various kinds of waste, including plastic and imported material, were found.

The latest illegal dumping site, measuring about 1.5ha or one-and-a-half football fields in Kampung Belida near Kuala Ketil, has been filled with several types of e-waste, plastic and also construction and scheduled waste, and is located just 50m away from the river.

This illegal site, which was once a sand mining pool and a popular place for anglers, is believed to have been in existence for a few years.

Eco warriors and nearby residents are worried that the indiscriminate dumping could result in the leachate being leaked into Sungai Muda if nothing is done.

“This is just like the one that happened last year in Kampung Kemumbung. This can lead to serious contamination to the land and the river. It is harmful not just to the environment but also to us humans, ” he said. Cause for worry: An aerial view of the second illegal dump site found on the edge of the Sungai Muda

Tneoh said e-waste and schedule waste must be properly disposed according to the law.

A villager, who requested anonymity, claimed that he saw several heavy vehicles going in and out of the site at the end of last year.

“It is a private land. I have seen big lorries coming to the site with various kinds of garbage, ” he said.

However, he added that there has been little activity at the site this year.

“We conducted an operation there on July 29, last year after we came to know about the illegal dumping activities there. We then sealed off the place, and it is now under our supervision, ” he said.

Zaidi said that they have have identified the culprits and they would be summoned to facilitate investigation soon.

“Action has been taken by the relevant authorities and we are now waiting for the report from the investigation, ” he said. 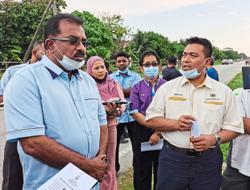 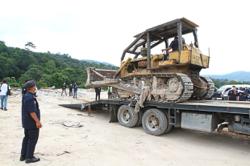