GEORGE TOWN: Penang is set to roll out a bigger golden chariot for the Thaipusam celebration.

The golden chariot, which was made in Mahabalipuram and Kumbakonam in Tamil Nadu, India, will make its maiden journey on Thaipusam eve from the Sri Maha Mariamman Temple in Queen Street to the Waterfall Hilltop Murugan Temple. Finishing touches: Workers completing the decoration on the new golden chariot for Thaipusam in George Town.

“The new one was donated by a few donors who wish to remain anonymous. It will be a bigger chariot, ” he said.

He said they were assembling the chariot which came as special cargo and the work would be ready by today.

“The new golden chariot is as big as the 164-year-old silver chariot, which is 7.3m tall.

“Although it is bigger, it will still be pulled by devotees as the wheels are very mobile. But we will also have a pull tug if needed, ” said Kuvenaraju when met at the Hindu Endowment Board grounds in Macalister Road here where the chariot was being assembled.

The golden chariot used for Thaipusam last year was 5.9m in height.

The PHEB and the Nattukotai Chettiar Temple have decided to have a united Thaipusam chariot procession after certain issues were ironed out.

chariot and golden chariot reach the Nattukotai Chettiar Temple and Waterfall Hilltop Murugan Temple by 1am on Thaipusam day on Feb 8.

Dr Ramasamy accused the Chettiars of deliberately delaying the departure of the silver chariot from Kovil Veedu.

But Dr Narayanan said the golden chariot, which was pulled by devotees, took long breaks that resulted in a gridlock on the streets. The silver chariot was pulled by bulls. 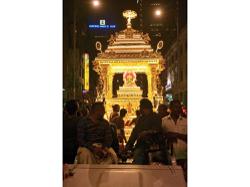 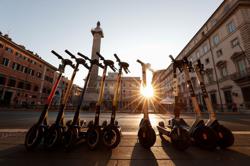 As Rome boosts micro-mobility, some complain of E-scooters gone wild