KULIM: An ammonia leak in a factory at the Kulim Hi-tech Park has led to dozens of its workers suffering from vomiting and seeking treatment.

In a statement, the Kedah Fire and Rescue Department said the leak was reported at about 11.40pm Sunday {{Feb 2}}.

"Firemen arrived about 20 minutes later and found ammonia gas leaking in the storeroom where pipes supplied the gas to the production floor.

"Among those affected were 49 employees, who were vomiting, and 10 were sent to the hospital for treatment.

"We have performed decontamination procedures to neutralise the gas before handing over the case to the Health Ministry for further action," the statement read.

It added that three ambulances were deployed to attend to the victims. 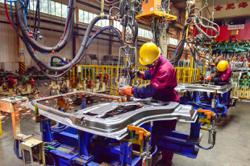