Massive network: The ‘Bubu Naga’ nets that were retrieved by MMEA personnel after the fishermen discarded them in the water.

JOHOR BARU: An attempt by a couple to escape from being arrested was foiled after police fired at the tyre of their vehicle.

“The 40-year-old man and 28-year-old woman, believed to be responsible for a house break-in, tried to flee from the police in a black Nissan Serena.

“They also tried to run over an officer, who fired his weapon and hit the front left tyre of the vehicle,” he said.

ACP Shahrurinain added that a police MPV then blocked the vehicle and the suspects were arrested at the scene.

He said the police had been trailing the suspects based on information gathered.

Both suspects have criminal records, with the woman being previously charged with gang robbery, as well as drug abuse.

The case is currently classified as attempted murder under the Penal Code.

“The fishermen were pulling up the ‘Bubu Naga’ nets when our patrol boat spotted them.

“Upon seeing our patrol, they immediately discarded the nets and escaped,” he said in a statement yesterday.

Mohammad said when the tide receded, MMEA officers traversed through knee-deep mud to retrieve all 33 of the nets.

“The Bubu Naga nets are detrimental to the ecosystem as the nets will trap fish of all sizes,” he said. 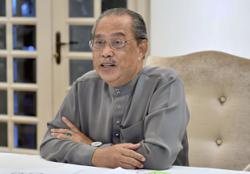