Getting up to speed: Baru (left) and Pembinaan Kekal Mewah group director Jeremy Tan browsing documents during a visit to inspect the progress of the Pan Borneo Highway in Sabah.

BEAUFORT: Construction of the Sabah-Sarawak link road, which will connect the most remote areas of both states, is expected to begin in six months, says Baru Bian.

The Works Minister said the first phase of the project would cost RM2bil from Lawas to Pa’ Berunut in Sarawak, a distance of about 90km.

“We expect work to start by the middle of this year, ” he said after a briefing on the latest Pan Borneo Highway development at the Sabah Oil and Gas Terminal yesterday.

Under the previous alignment, road users travelling from Sabah to Sarawak or vice versa have to go in and out of Brunei eight times.

With the proposed link road, they do not have to go through Brunei.

Baru said the construction of the Pan Borneo Highway was underway with progress being made in some areas.

The Pan Borneo Highway is a road network connecting Sabah and Sarawak with Brunei and Kalimantan (Indonesia).

He said allegations that the project was not moving following the change of government was not true.

“There was a brief delay earlier due to changes in structure and planning after the new government found cheaper alternatives to implement the project without compromising on quality, ” he said.

Baru said under the 11th Malaysia Plan, package one of Jalan Donggongon (Penampang) to Simpang Jalan Papar-Spur had been completed while packages two and three were progressing at 75%.

He said upgrading and road building works from Lahad Datu to Tawau and Lahad Datu to Sandakan, the Papar roundabout area to the Benoni roundabout, and Sipitang Sindumin to Sipitang Oil and Gas Industrial Park had been completed.

“Many other roads have also been upgraded. To date, Pan Borneo is at 22% completion, ” Baru added.

He said he was also pushing for another key road development plan, namely the Trans Borneo Highway from Kalabakan (Sabah) to Simanggaris in Kalimantan.

Under Trans Borneo, he would propose that the highways connect to the hinterlands of Sarawak along the border of Sabah and Kalimantan, connecting villages such as Ba’ Kelalan, Bario, Long Semadoh, Long Luping, Long Sukang and Lawas to Temburong and towns such as Merapok and Sipitang in

“Long Pasia in Sabah will also be connected through Long Semadoh, ” he said.

Under Budget 2020, RM600mil was allocated for the 40km Jalan Kalabakan-Serudong and the construction of the Customs, Immigration, Quarantine and Security Complex and government housing quarters.

The completion of these roads was crucial, especially with Indonesia moving its capital from Jakarta to Kalimantan.

Earlier, Baru welcomed some 50 PKR members from Sarawak, who launched their election machinery to assist Parti Warisan Sabah in its campaign for the Kimanis by-election tomorrow. 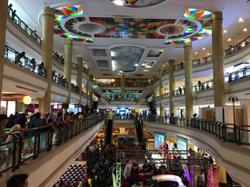