You have access to more information with the same size of laptop, thanks to the Huawei Matebook D 15’s 87% screen-to-body ratio.

Grab the freebies worth up to RM1287* on this Saturday

THE soon-to-be-launched laptop from Huawei, the Matebook D 15, might just break the market with its super cool price of just RM2,499 for features that are normally seen on more higher end and higher priced laptops.

Its attractive features include a lighter weight, HD FullView display and an 87% screen-to-body ratio.

And now, if you purchase the Huawei Matebook D 15 during the launch, you'll get a powerful light mobile computer with amazing features that comes bundled with free gifts worth a total of RM1,287, on a first come, first serve basis.

Although most smartphones have been champions of FullView displays, this trend has yet to be ported onto laptops – until now. With the Huawei Matebook D 15, you have an IPS full view display in high definition (HD), at 1,920 by 1,080 pixels, which expands the visual capacity of the laptop screen to give you a larger viewing real estate space for more contents on one screen.

Its 87% screen-to-body ratio also means greater access to more contents on one page without scrolling the screen to search for your items and allows you to work on your PowerPoint slides or plan your Excel sheets without having to constantly scrolling the pages.

With its curvy, streamlined design, the laptop exudes a stylish, unique identity that is aesthetically classy. With a 1.53kg weight and a thickness of just 16.9mm, the Matebook D 15 is one of the lightest and thinnest choices around – even with its charger, it is light and convenient to carry around.

MateBook D 15 is equipped with a Type C charger, which makes it useful for charging both the laptop and your Huawei smartphone too. It is protected from overheating and automatically cuts off the power if necessary to ensure safety.

Coupled with its powerful system architecture and software stack capacities, the Matebook D 15 offers the largest screen with the lightest weight possible for a laptop of its size. 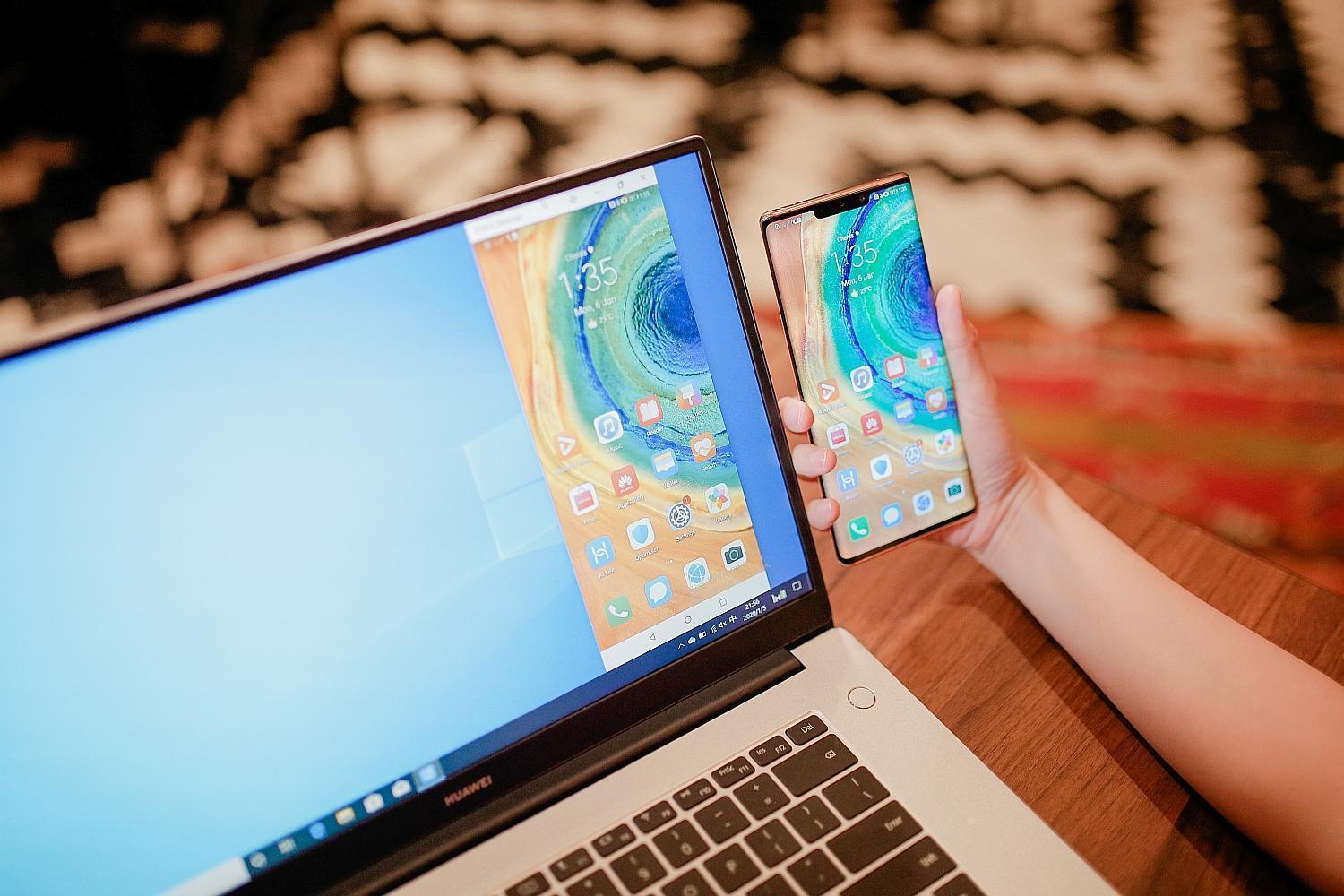 One of things Huawei mobile computers are lauded with is their ability to seamlessly collaborate among its devices and the MateBook D Series certainly encapsulates that.

Thanks to the Huawei Multiscreen Collaboration feature present on the Matebook D 15, merging views between the MateBook and Huawei smartphones – as well as other Huawei Smart Life accessories – is super easy.

This feature makes working even easier for professionals on-the-go and students to collate tons of data when preparing reports or assignments.

Gamers playing off their mobile phones are able to expand their gaming experience as they can cast their mobile game screen directly to the Matebook D 15 for a larger view and better gaming immersion.

Power on and log in to your MateBook D 15 with greater ease, as the power button doubles as a fingerprint sensor to unlock your laptop. 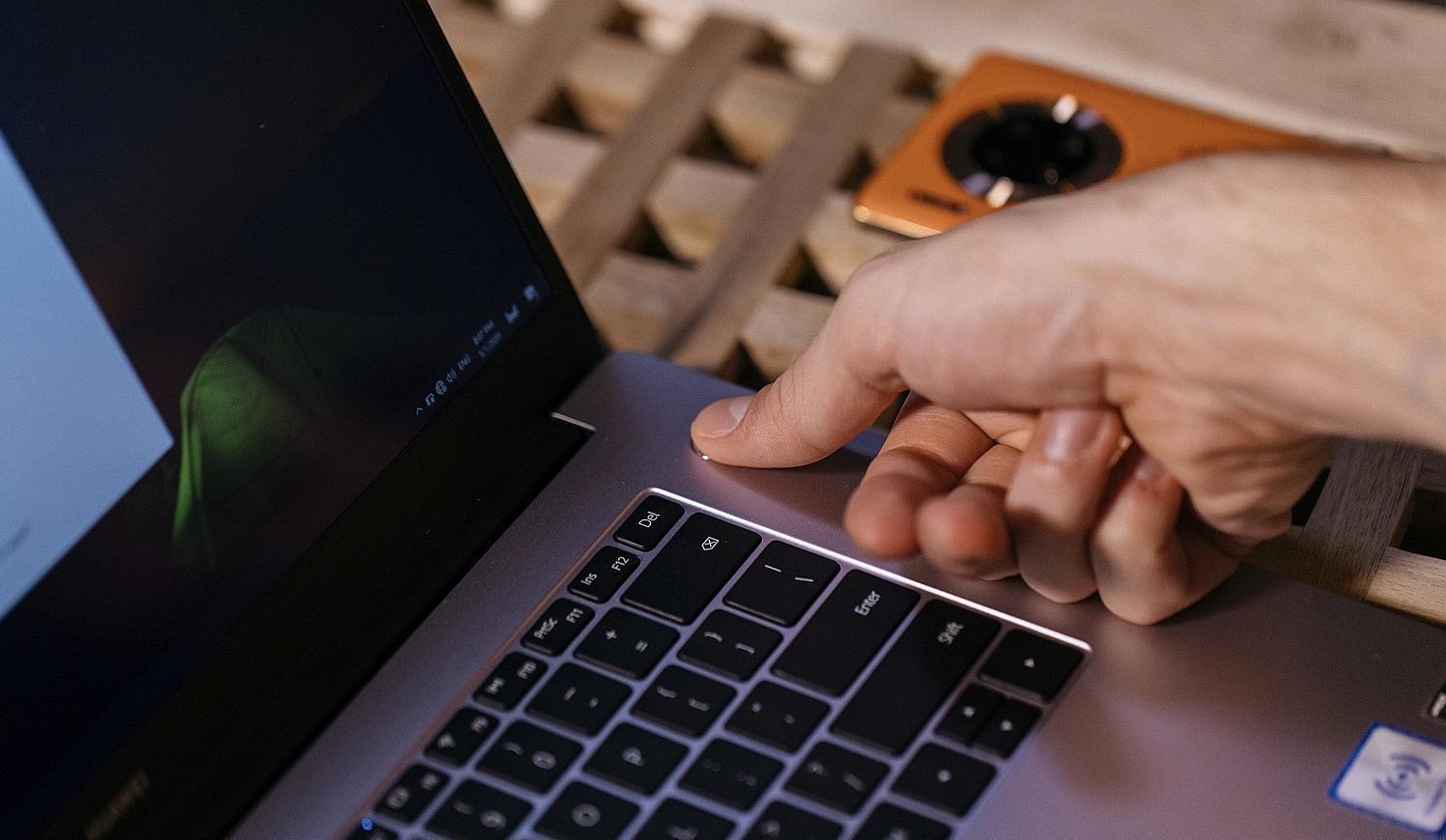 Faster and a more secure way to access the Matebook D 15, via fingerprint sensor.

This feature ensures security and yet eliminates the hassle of having to enter your password every time you turn on the laptop.

This login feature is in fact the first on any Windows PC and authenticates your user identity just as you turn on the power and you can immediately get on the desktop screen immediately.

The fingerprint scanner’s recognition improves with consistent use. 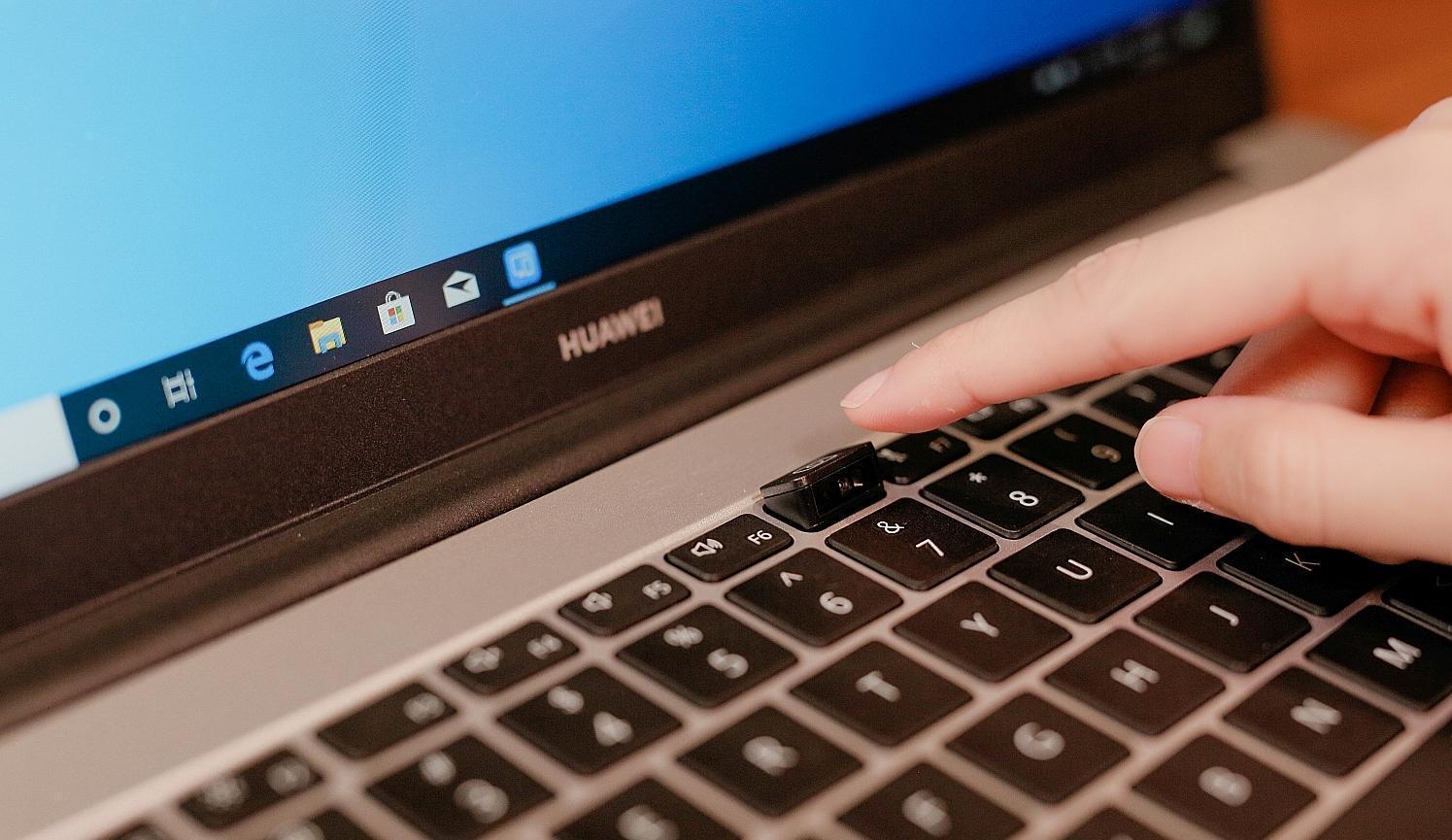 Privately hidden away, the Matebook D 15’s camera only pops up when you want it to.

Online privacy is an ongoing concern in today’s connected world, Huawei places priority on your security and has taken the initiative to house the Matebook D 15’s webcam where you have full control.

It is in fact hidden on the keyboard and will only pop up when you want it to. This saves you the worry of accidentally recording something – especially in an age where hackers are reported to gain access to webcams for nefarious purposes.

It also removes the hassle of obscuring the camera with your finger, which might damage the lense or taping over that, which defaces the laptop. 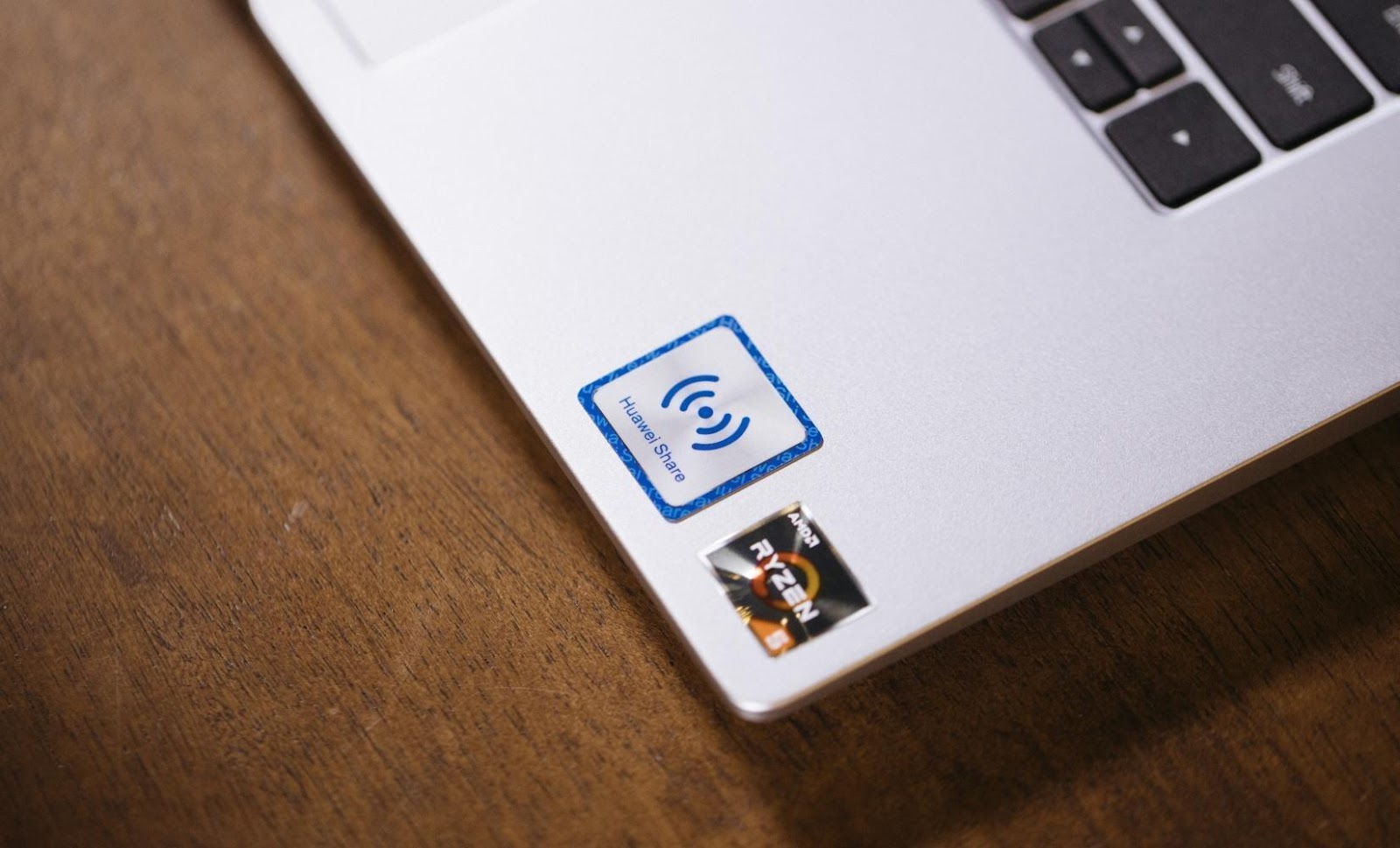 The Huawei MateBook D 15 is powered by AMD Ryzen 5 3500U processor and integrates the Radeon Vega 8 Graphics graphics card for powerful performance and outstanding entertainment versatility.

Enhanced with 8GB in dual-channel architecture DDR4 RAM, the Huawei Matebook D 15 also comes with two device storages, consisting of 256GB SSD and a 1T HDD, which increases its read and write speeds by 50% over a single channel memory. 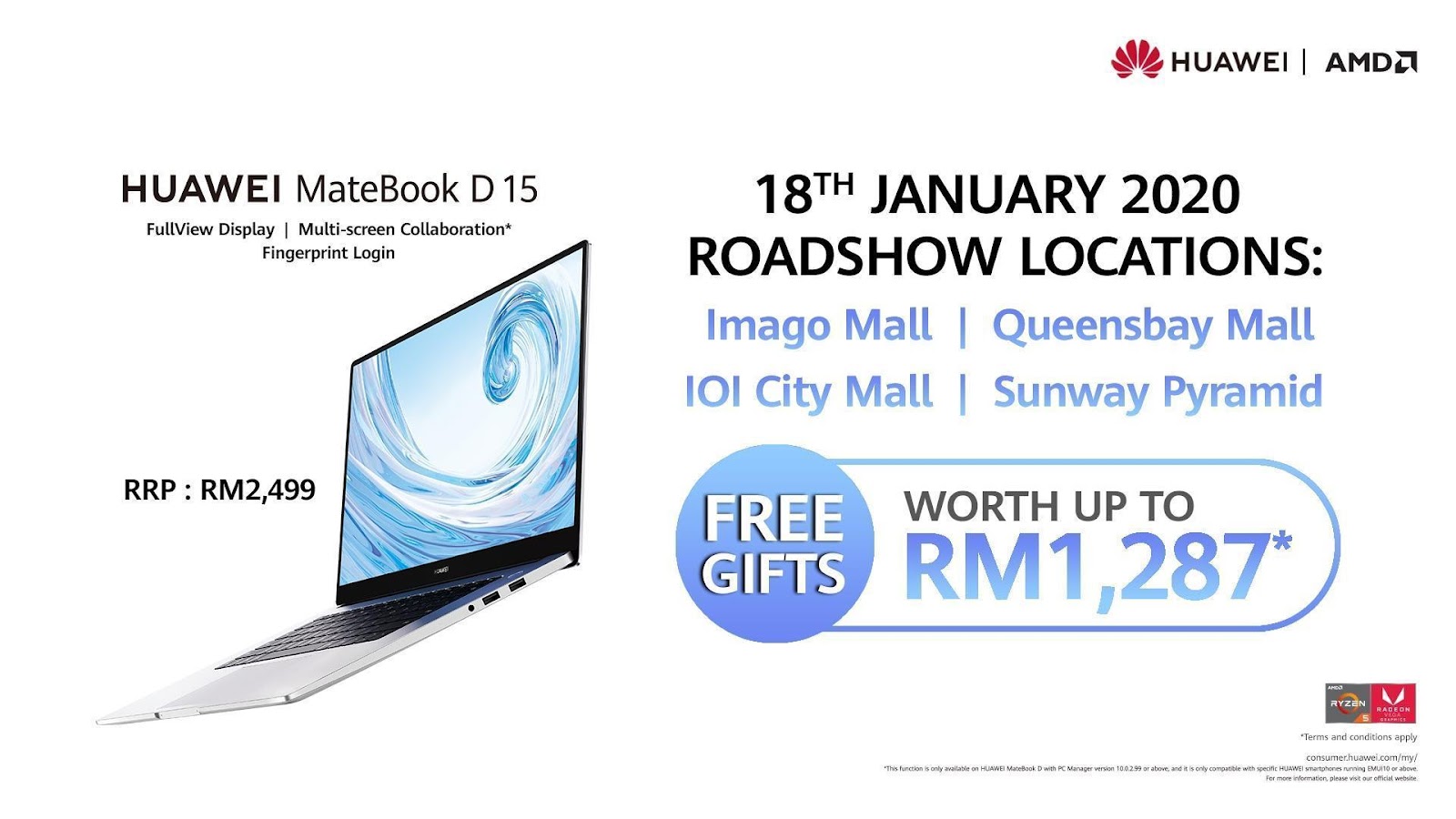 Overall, not even all the flagship laptops in the market are able to provide all these cutting-edge technology packaged at a budget-friendly price.

The Huawei MateBook D 15 is the ideal laptop choice thanks to its value-for-money features in a sleek, ergonomically pleasing design. Its lighter weight makes it convenient if you are on the move every day.

Grab your Huawei Matebook D 15 at the price of RM2,499, bundled with free gifts of a complementary Huawei FreeBuds 3, Office 365 and Bluetooth mouse, for a total worth of up to RM1,287* (available on a first come, first serve basis, with limited stocks at selected locations) and a lucky draw. 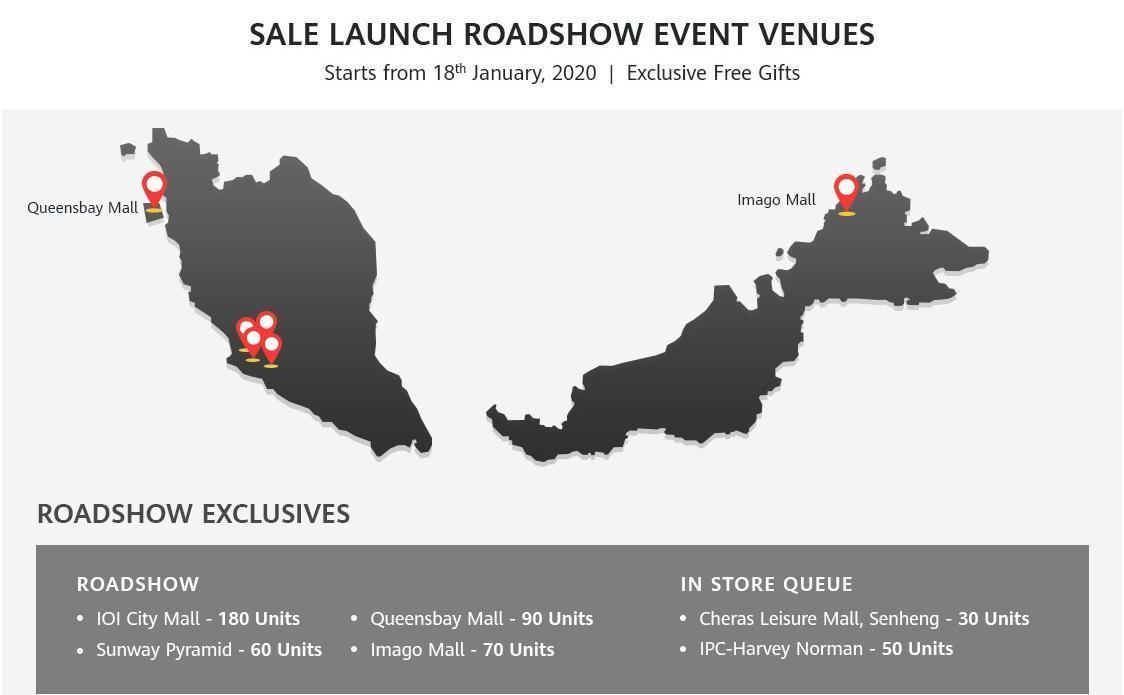 What are you waiting for? Head over to the nearest Huawei Roadshow this Saturday!