Blueprint for a new vision is one of shared prosperity 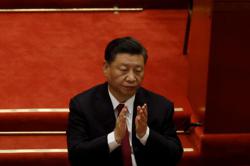 The Prime Minister said when he headed the country for the first time, it was through Vision 2020 that the government then had targeted as the year Malaysia would be considered a developed country.

“However, in the past few years, we realised that the target could not be achieved fully and due to that, we prepared a blueprint known as Shared Prosperity Vision 2030.

“There is a need for that extension as it is the duty of the government to ensure a peaceful and developed country, ” he said in his New Year address.

“We may not realise that every time we hold international conferences such as the KL Summit, Malaysia is showing off to the world how we have successfully lived peacefully with all our diversities, ” he said.

Dr Mahathir added that it had never crossed their minds to come up with laws which ostracised people or migrants.

“Even though we have allocations for Bumiputra, it was to ensure their survival and not meant to deny or take away the rights of the others.

“This is why the riches of the nation is not only held by bumiputra but also shared with others and in many other instances, held by other races, ” he said.

Dr Mahathir urged Malaysians to work hard and prepare for global political uncertainty as the turmoil due to the trade war between big powers and quick technological advances were factors that would decide the direction of the world and the country.

“Those who understand these changes have found opportunities for jobs and incomes. Those who do not change will lose their source of livelihood, ” he said, adding that the government would assist those who work to better themselves.

Dr Mahathir also called on Malaysians to put aside their differences and celebrate similarities as well as embrace noble values which were part of the criteria to be a developed nation.

“Values such as being hardworking, being disciplined, cleanliness, tolerance, respect, well-mannered and being big-hearted are what differentiates us from those who are not advanced and backward.

“These values represent all cultures, religions and races, and diversity, ” he said.

Leaders urge Malaysians to strive for a better year

The challenges that lie ahead