KOTA KINABALU: Fifteen Filipinos who slipped into Sabah were detained in an operation aimed at stemming the influx of illegal immigrants into the state’s east coast.

The immigrants, aged between three and 50, were picked up in waters near Kampung Tong Batu Lok Damai in Pulau Sakar near the east coast town of Lahad Datu at about 12.30pm on Thursday.

Sabah Marine Police chief Asst Comm Mohamad Pajeri Ali said the suspects did not have any documents on them.

The operation was jointly conducted with the Immigration Department.

“All of them admitted they were from the Philippines and came into the state illegally, ” said ACP Pajeri.

He said 16 marine police officers, two Lahad Datu-based Immigration officers and three vessels from the marine police were deployed for the joint operation.

ACP Pajeri said police were stepping up operations during the current year-end holiday season.He urged those with information on illegal immigrants to inform the nearest police station.

The Eastern Sabah Security Command (Esscom) has been on a heightened alert in east coast Sabah amid intelligence reports of Abu Sayyaf-linked cross-border groups prowling the sea border between Sabah and southern Philippines.

Last week, suspected smugglers opened fire at a Malaysian Customs team near waters off Pulau Mataking in Semporna, which is close to the Philippine sea border. There were no casualties but the gunmen managed to flee back to Philippine territory. 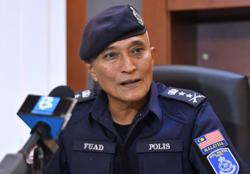