Yadim programme in schools not an act of Islamisation, says Education Ministry

PETALING JAYA: A viral circular from the Education Ministry, reportedly allowing Rakan Siswa Yayasan Dakwah Islamiah Malaysia (Yadim) to carry out preaching activities (aktiviti dakwah) in schools, is not an act of Islamisation, the ministry clarified.

It also said that the activities do not involve non-Muslim students, vernacular schools and missionary schools.

Issued on Nov 27, the circular also stated that preaching activities by the group are allowed to be carried out in teacher training institutes, polytechnics, community colleges, public universities and selected private universities.

"We guarantee that Rakan Siswa Yadim must adhere to existing rules and principles of religious freedom for non-Muslim students.

"Schools are also advised to monitor and ensure that the activities does not involve non-Muslim students," the ministry said in a statement Tuesday (Dec 24).

The circular, it added, is an administrative document between the ministry and educational institutions to encourage leadership programmes among students.

"The permission to carry out Rakan Siswa Yadim (activities) is dependant upon the permission of the institutions and/or schools, and is limited to Muslim students who want to participate voluntarily," the ministry said.

The ministry acknowledged that the leaked letter could cause misunderstanding, adding that it is taking the leak seriously.

In his Chinese-language Facebook, Dr Wee questioned why religious propagation was being mixed up with school education. 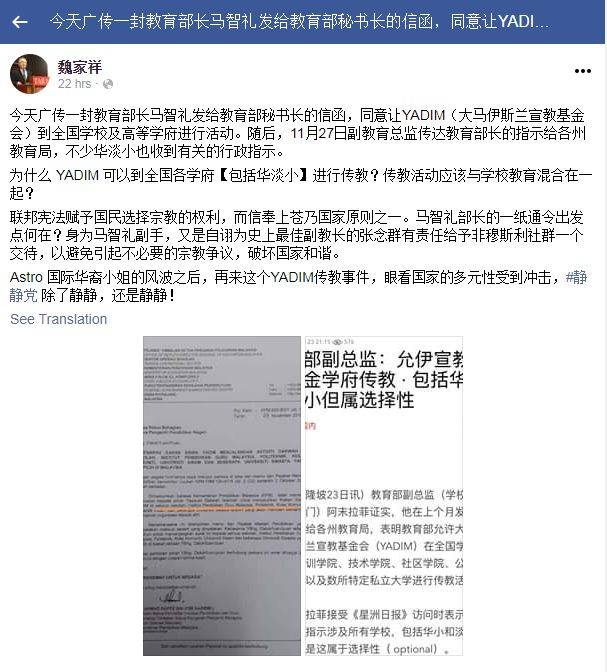