‘Pian’ voted word of the year in Malaysia 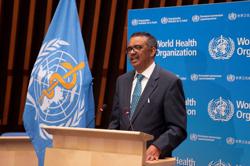 THE Chinese character Pian – which can be translated as lying, cheating or to deceive someone – was voted as the Word of The Year for Malaysia in 2019, reports Sin Chew Daily.

However, he said it was not an attempt to voice their dissatisfaction to the government.

“This word ‘Pian’ is not made against the government or any association.

“It represents the people’s collective voice.

“We hope the government can learn from this,” he told reporters while attending the 2019 Annual Malaysian Han Character Selection event on Sunday.

It is held annually to pick out words which best summarises the entire year.

This year, the selection committee received 267 word nominations, of which 10 were shortlisted for voting.

> Malaysian singer Fish Leong (pic) says she continues to believe the world is beautiful despite the emotional trauma she went through in her recent divorce, China Press reported.

Leong, who hails from Negri Sembilan, was visiting a primary school in Taiwan’s Keelung City on Saturday for a performance.

Reporters who were at the event asked her how she was feeling recently, to which she replied saying: “I am fine.

“I continue to believe that the world is beautiful.”

It came as a relief to many fans who were concerned about Leong’s emotional wellbeing.

The 41-year-old singer had reportedly broken down during mid-song in September.

After the performance ended, she held a press conference saying that she was divorced, having ended her nine-year marriage with businessman Tony Chau.

Chau was recently seen dating two women and were photgraphed holidaying with them in Singapore.

Chinese character , Pian , Word of The Year for Malaysia

Faizal will remain as caretaker MB until new one named
‘PN shaky after Perak MB ouster’
Vaccine decision to be out next week
MCMC: Be wary of fake accounts on social media
CMCO status in several states to be known today
M’sians make their mark in Hollywood blockbusters
Not all eligible for recalibration plan
Virus infections hit 70,000 mark
Mum braves floodwaters for her newborn
Man fined for spitting at worker