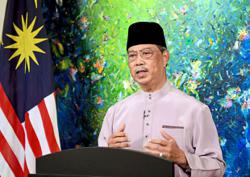 Dream come true: (From right) Tengku Amir and Tengku Zatashah with the children during the meet and greet with Alex the Lion and Marty the Zebra, cast members of Madagascar The Musical at the Plenary Hall of Kuala Lumpur Convention Centre.

“I really enjoyed it. I loved seeing the animals singing and dancing,” she said about the musical which is based on a movie about a group of animals which escaped from the New York Zoo and found themselves stranded in Madagascar.

As for her mother Norhayati Shaari, the sight of her daughter, who suffers from leukaemia, enjoying herself was a touching moment.

“I cannot describe the overwhelming feeling I had when I saw my daughter enjoying herself. I couldn’t ask for more than that,” said the 46-year-old housewife.

It was Make-A-Wish Malaysia that made the dream come true for Amni and two other children on Friday by taking them to the musical performance at the Plenary Hall of Kuala Lumpur Convention Centre.

The organisation works towards granting the wishes of children with life-threatening medical problems.

Selangor princess Tengku Zatashah Sultan Sharafuddin Idris, the royal patron, said the foundation was looking forward to granting more wishes next year, as it would be its 10th anniversary.

She said such wishes gave the children hope and strength, which would help them in their battle against their illness.

“Positive effects are seen through the granting of wishes where kids are transformed into happier and stronger persons.

“I could barely recognise Mey Ein when I saw her today. She looks healthier with her shiny hair,” she said, referring to nine-year-old Chan Mey Ein, a leukaemia patient whom she met last year.

Make-A-Wish Malaysia chief executive officer Irene Tan said the outing was part of a fundraising campaign and intended to motivate the children in their fight to overcome their illness.

The primary goal of Make-A-Wish was to give hope, strength and joy to these children, she said.

“I can see the kids giggling and having a good time.

“I believe the outing gave them joy and encouragement to continue their treatment. They have been through a lot,” she said.

Besides watching the live performance, the children also had the chance to meet the cast.

Proceeds from ticket sales of the musical on Friday will be used to grant wishes in 2020.

By the end of this year, Make-A-Wish Malaysia would have fulfilled 93 wishes. The foundation will also keep track of the development of the children even after their wishes had been granted.