Indah Water, you’re on your own: Govt to stop RM150mil annual subsidy in five years 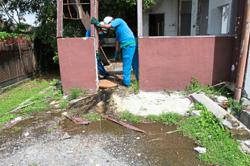 “The government is currently paying IWK RM150mil a year in subsidies and this is done to avoid problems with regards to sewage management in the country.

“However, the government will stop providing this yearly subsidy in five years as IWK would be financially independent by then, ” he said when answering a supplementary question by Ahmad Amzad Mohamed Hashim (PAS-Kuala Terengganu) in the Dewan Rakyat on Wednesday (Dec 4).

Dr Jayakumar added that IWK will be signing an agreement with a state water operator on Dec 20 for IWK bills to be combined with water bills.

However, he did not reveal the state involved, only saying that the Penang government is also keen in seeing combined IWK and water bills for the state.

He assured lawmakers the move to have a combined bill will not see increase in IWK fees.

He also argued that a combined bill would help the national sewerage company increase its collection.

Asked if water bills would go up next year when the Tariff Setting Mechanism (TSM) is implemented, Dr Jayakumar did not provide a definite date, only saying that he would be making an announcement on the matter soon.

Earlier, to a question by Datuk Mansor Othman (PH-Nibong Tebal), Dr Jayakumar said the pilot involving combined IWK and water bills in Labuan between 2016 and 2018 saw collections for IWK increase from 87% to 90.4%.

This, he added, translated to an increase in collection for the Labuan Water Department from RM33.11mil to RM33.82mil for the same period.

Last month, Dr Jayakumar told lawmakers that the water tariff is expected to go up when the TSM is implemented next year.